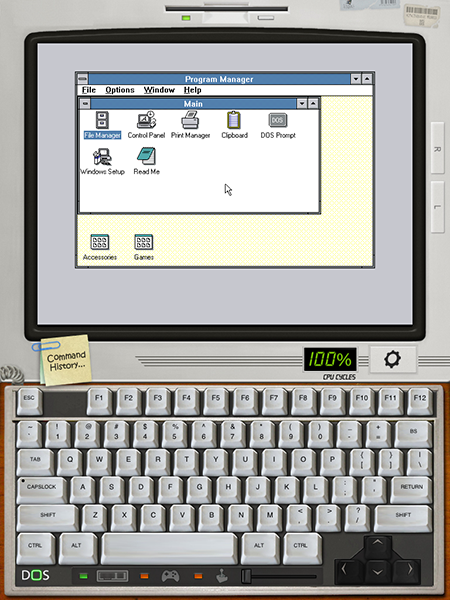 iDOS hit the Apple app store late Monday night and was gone before it even got started thanks to Apple’s on again-off again policy for App Store approvals. The DOS emulator was chock full of goodies from the early days of computing including playable versions of Ms. PacMan and Dig Dug. Once news hit the wire that the app was available, nostalgic techies descended upon the app and managed to get  Warcraft II, Space Quest, and even Windows 3.0 running on the emulator. For those dying to know, Solitaire for Windows apparently works quite well on the iPad.

The emulator was a derivation of DOSbox, a popular open source DOS emulator and ran on both the iPhone and the iPad. Beautifully designed, the application featured an aging terminal with a floppy drive (remember those?), a de facto standard keyboard with coiled cable, and  a few obligatory sticky notes which were used in those pre-Evernote days to keep track of all your important computing information. Sounds delightfully geeky, no?

Before most of us could get in on the fun, Apple pulled the plug on the app and it is no longer available. Apple has let some emulators like the popular Commodore 64 app stay in the App Store but iDOS probably got the boot as DOS is still owned by Microsoft. Rather than let a “who owns what” dispute start to brew, Apple quickly and quietly pulled the app. All is not lost, though.

Thanks to Cydia, the emulator app is now available for your downloading pleasure as DOSPAD. If you want to hone your terminal skills (“cd..” anyone?), you can snag a free copy for your jailbroken iOS device. Instructions on acquiring the DOSPAD app can be found here and you can learn more about jailbreaking your iOS device here. Enjoy your walk down memory lane!

UPDATE: 9to5 Mac is reporting that iDOS was pulled because it provided access to the iOS filesystem on non-jailbroken devices. Supposedly, Gumball Tech posted a 3-step process that would let you access the root filesystem without jailbreaking your handset. You have read access only so you can’t do much with this application but even read access would be reason enough for Apple to shut it down.