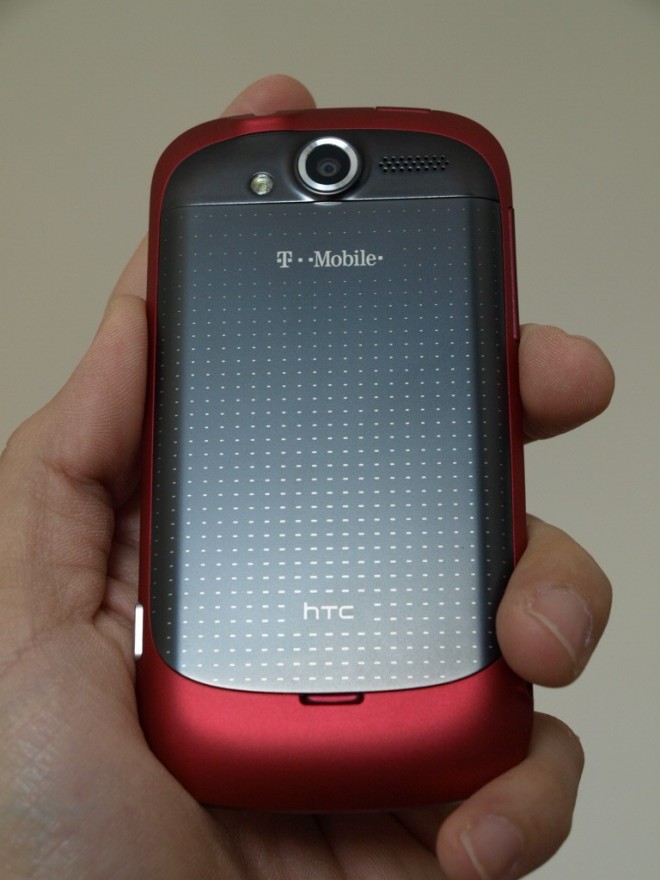 We were able to get our hands on the T-Mobile myTouch 4G and this Android powerhouse will be able to go toe to toe with any of its competitors.

The face is similar to the myTouch 3G Slide but the lack of a physical keyboard enables HTC to create a sexy and slim device. The 3.8-inch touchscreen is not the biggest on the market but it’s bright, responsive and should satisfy most users.

You have the branding on the face above the screen and the standard menu, home and back buttons. Instead of the search button, the myTouch 4G has a Genius button which enables consumers to use voice controls. We asked the company about the relevance of this button considering Google will be baking in stronger voice functionality into Android itself and T-Mobile said it will stay ahead of the curve by offering features that Google doesn’t. One of these will be a complete hands-free mode, which can allows users to hear and respond to texts via voice, as well as a dedicated car mode.

There’s also a front-facing camera above the screen and this will let users make video calls on the go via the company’s HSPA+ network. The myTouch 4G will be able to make video calls to a variety of devices using Qik or Yahoo, which gives it a slight edge over the Apple iPhone 4’s FaceTime, which can only make video calls to other iOS devices or Mac computers.

The body of the myTouch 4G is primarily metal and it does have the feel of a premium device. It’s thin and sexy (as sexy as phones get, that is) and it has the right amount of weight in your hand. You have the standard headphone jack, camera button and microUSB port along the spines and top of the handset. The 5-megapixel camera module and flash are relatively subtle on the back but we wouldn’t have minded an 8-megapixel sensor.

Inside, the myTouch 4G is no slouch. It has a second-generation Snapdragon 1 GHz processor, WiFi (802.11 n support), GPS, Bluetooth, HSPA+ and 768 MBs of RAM. It will launch with Android 2.2 with a customized version of the Sense UI.

Check out the video below and the photo gallery and let us know what you think in the comments.

US Cellular has just launched their first Android-powered Galaxy S device, the Samsung Mesmerize. You can grab this phone now...