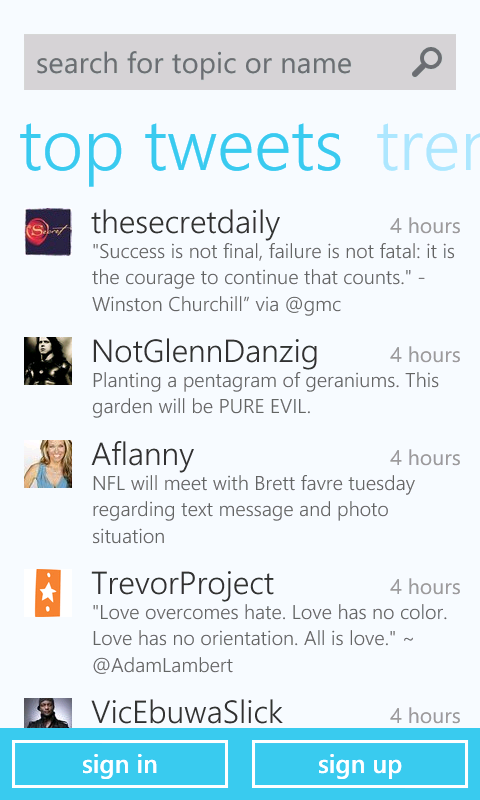 Just in time for the launch of Windows Phone 7, Twitter has announced their own dedicated app for Microsoft’s brand new mobile platform. Features include the timeline for friends you follow, suggested users you might want follow, direct messages, user-made lists, and takes advantage of the Pivots system to switch between those categories with sidewards swipes.  As you can see, Twitter for Windows Phone fits right in with the native Metro user interface.

It’s cool that Twitter is taking direct control of official clients on mobile platforms these days, but that’s not stopping third parties from trying to do better. Seesmic has been vocal about their participation on Windows Phone 7, with other competition likely on the way. As far as other social networks go, Facebook has a Windows Mobile client, but hasn’t mentioned anything about Windows Phone, nor has LinkedIn.

Curious about Windows Phone in general? Take a look at our review of the whole OS, or a few specific handsets, like the HTC Surround or the Samsung Focus. It’s for sure nice, and definitely a step in the right direction, but there’s still a lot of maturing to do.

Microsoft has strong quarter on eve of Windows Phone 7

Microsoft had a great fiscal first quarter with little help from its mobile division. You have to wonder how well...