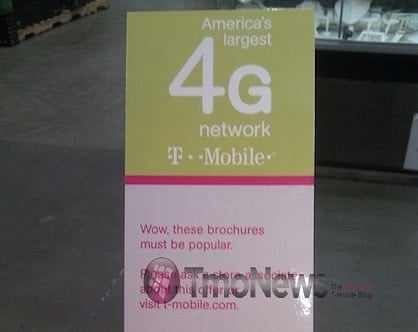 T-Mobile doesn’t have to seem to have a real 4G solution, so the next best thing is to fool everyone and call HSPA+ “America’s Largest 4G Network.” The carrier has been calling its HSPA+ mobile broadband speeds “4G-like” for some time now, and it has even raised the ire of competing carriers like AT&T. The fact that T-Mobile has the audacity to call its network 4G really says something about its future plans to deploy a real 4G network.

Just last week, the ITU decided on what can be considered 4G technology — WiMax 2 and LTE Advanced. Both Sprint and Verizon have been accused of confusing the public by calling its WiMax and LTE networks “4G” networks. Though, to be fair, both WiMax and LTE are based on the same technology – OFDM, which isn’t the same as the CDMA or WCDMA technology we see in our 3G networks today. Additionally, WiMax and LTE are delivering faster speeds and less latency than 3G, so to call it 4G isn’t as big a stretch when compared to HSPA+. The latter is just ridiculous since it’s still just a boost of the WCDMA protocol.

Since carriers like Sprint are being accused of misleading the public by calling its WiMax network “4G,” it seems like T-Mobile is just going to go ahead and do as it pleases, too. After all, HSPA+ does deliver something around 6-7Mbps downloads in real life (versus its theoretical 21Mbps). Why the hell not? While we’re at it, let’s just completely disregard all the other standards and rules and names we’ve given to other technologies and protocols. After all, they’re all arbitrary, right? I guess 4G doesn’t really mean anything. Wanna know how fast my iPhone 4 download speeds are on average? 1.21 jigawatts. Because apparently I can just call it whatever I want now.