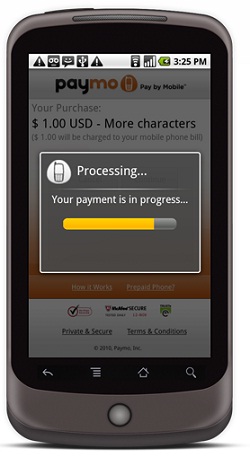 TechCrunch is saying that Boku is in early high-level talks with both Apple and Google and this could involve a deeper level of integration or an outright acquisition. The number being floated out there is about $250 million, which would be pocket change for both Apple and Google.

Apple and Google have tangled over acquisitions before, as Apple was all set to snap up the mobile advertiser AdMob before Google swooped in with its $750 million offer. The iPhone maker eventually spent about $275 million to buy Quattro Wireless instead.

As for Boku, the company can already be used in the Android Market for things like in-app purchases and it could provide some badly-needed improvements to the Android Market. While the company has made strides by added more paid markets and the upcoming PayPal integration, Boku and maybe even carrier billing could make buying Android apps a more pleasant experience.

As for Apple, that $250 million could be well spent even if it only keeps the company away from Google and Android. Say what you will about the company’s App Store policies, it does provide a seamless way to browse, buy, download and install apps for its iOS devices.

Apple loves to get its slice of those digital goods and it could make even more money if it could branch out to physical goods. We know that there will be Near-Field Communication integration with future iPhones and it’s not too hard to imagine your iOS product becoming a mobile wallet with Steve Jobs’ company getting a small slice of each transaction.

We’ll keep our eyes on this one and let you know how it will impact you.