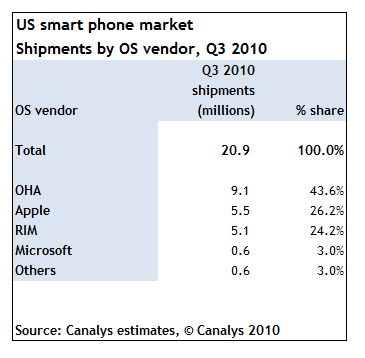 It may only have one device on one carrier in the U.S., but Apple has taken the lead in smartphone market share here. Android holds the lead in terms of smartphone OS market share in the U.S. with 44%, but that’s no surprise given its available on a number of handsets with nearly every carrier in the U.S. Of the 20.9 million smartphones shipped in the third quarter, Android handsets made up 9.1 million of those, nearly double Apple’s 5.5 million units shipped.

While Apple holds the U.S. smartphone market share right now, there’s no telling how long it will keep that spot. Canalys reports:

Once again this quarter, it was devices running the Android platform that proved the greatest driver of growth in the worldwide market, up 1,309% year-on-year from 1.4 million in Q3 2009 to more than 20.0 million units in Q3 2010, forming a quarter of the market share. ‘With Samsung, HTC, Motorola and Sony Ericsson all delivering large numbers of Android devices, and with focused efforts from many other vendors, such as LG, Huawei and Acer, yielding promising volumes, the platform continues to gather momentum in markets around the world,’ said Canalys Senior Analyst Pete Cunningham. ‘Android has been well received by the market and in some geographies it is becoming a sought-after consumer brand.

There have been several surveys stating that consumers are wanting an Android device as their next smartphone, and with a wide range of hardware options and carriers, it seems like a more attractive option than Apple and its exclusivity deal with AT&T. (Of course, if we see that Verizon iPhone in early 2011, this could change the game completely.)

Meanwhile, RIM is quickly slipping and was outsold by Apple over the summer. RIM’s flagship device, the BlackBerry Torch didn’t seem to help its bottom line as much as it had hoped.

Right now, it’s very clear that the battle for the American smartphone market is between Apple and Google – RIM and Nokia are losing a lot of ground. Of course, there will be a new OS with new handsets arriving in the form of Windows Phone 7 devices. So far, the platform has been getting some good reviews and its hardware partners aren’t slouches, either, so it will be interesting to see what kind of impact it will have over the market – especially during the holiday season.

After rolling out the high-end G2 and myTouch 4G, T-Mobile unveiled its lineup of affordable Android handsets. These low-cost offerings...