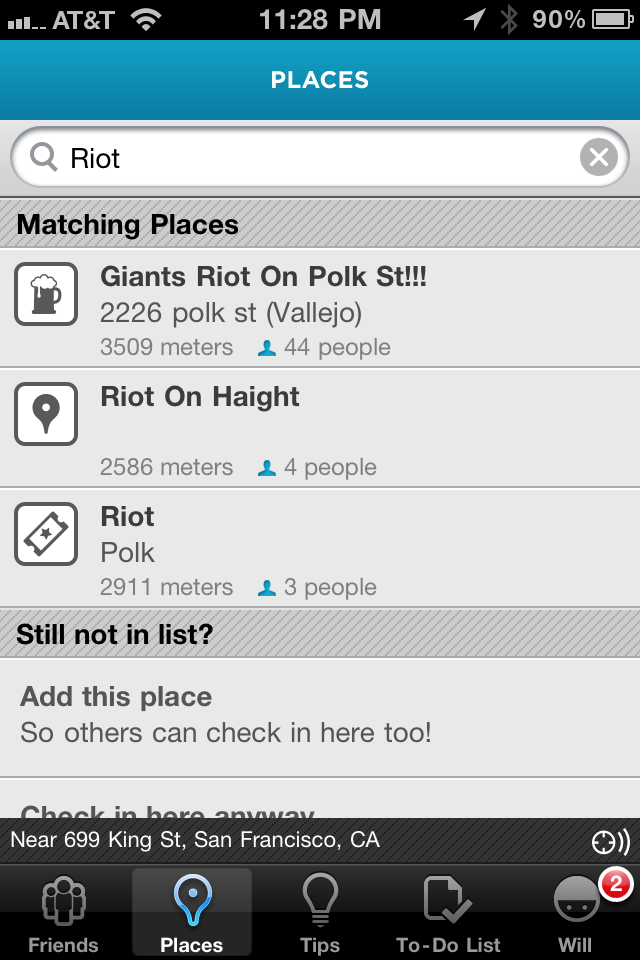 In case you haven’t heard, San Francisco has just seen its beloved SF Giants win the World Series. And, you know what that means. Yup, San Francisco has been taken over by rioting crowds celebrating their home team being crowned the champions of baseball. We can’t imagine the same sort of madness is going down in Texas right now, but in the

Mission district of SF, as well as other parts of the city, police are apparently having trouble (and in some cases, unable to) control the crowds of too-enthusiastic Giants fans. The activity has gotten so bad that Foursquare, Twitter and Ustream are buzzing with coverage of the shenanigans in SF.

First of all, you should know that there are several SFRiot hotspots in the city right now. What’s even crazier is that people seem to be checking into Foursquare at said riots. We have to assume those Foursquare users are just as enthusiastic about their smartphones and social networks as they are about the San Francisco Giants. A quick search for “riot” near San Francisco in the Foursquare iPhone app shows that people are checking into the riots on Haight St and Polk St. If you’re so inclined, you might want to get out there quick, you never know what kind of badges you can earn in a riot.

Twitter is also churning out reports on #SFRiot. Everything from reports of bottles being thrown to people stealing fire hoses to police having to escort the San Francisco Fire Department into areas to put out intentionally set fires. At least one live video stream of the riots have popped up in the public timeline. You can follow the helicopter-based stream here.

There’s also a live stream on UStream, and currently shows a group seemingly starting a fire in the middle of the street. Overheard on this stream: “Dude, they must have been jumping on your car, it’s all dented up.”

You can follow the riot activities on Twitter via the #SFRiot and #SFScanner hashtags.
Follow the @Emergency_In_SF Twitter feed for the latest news from emergency response teams around SF.
Listen in on live police radio chatter by clicking this link and load it into iTunes.

There are now people setting Muni buses on fire.

Listen to the SF police scanner in this Ustream feed:

Meet 8pen, another Android keyboard with a steep learning curve

There are many keyboard replacements available for Android these days, most of which are much better than the stock Android...