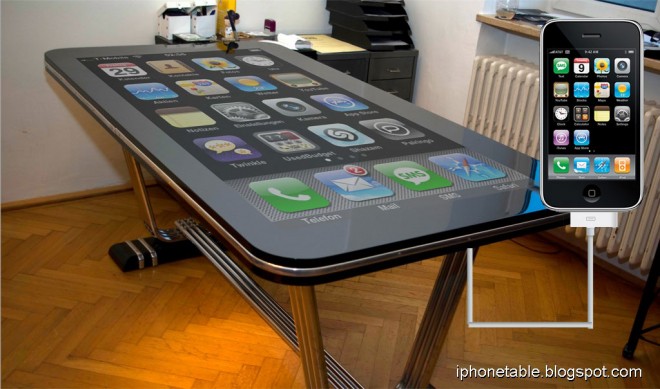 Maybe that iPad just isn’t big enough of a screen for you. How does a 58″ HD-capable capacitive touch-table sound? Pretty sweet, I’d say. Table.Connect for iPhone lets you control your iPhone 4 or iPhone 3GS when connected by cable, complete with one-to-one panning and pinch-to-zoom. iOS 4 is fully compatible, and as you can see from the video below, it’s running pretty smoothly. You need to jailbreak your iPhone to get this to work, and install a separate app on the phone itself.

That would be one hell of a photo album, for one. Simply browsing the web would be quite the experience. Gaming might be a little too much to handle, depending on the genre, but Tap Tap Revenge would be doable. Audio out to some big home entertainment speakers would make it an awesome media center. In landscape, the iPhone’s keyboard could be perfectly functional, if a little big to type on for day-to-day use. It’s too bad the home screen doesn’t adjust for that landscape orientation, because then it could be a really awesome and useful desktop.

Working with the iPhone is kind of a cool gimmick for now, but in order to be really practical, I’d like to see this tablet play nice with an iPad, whose applications are built for the larger screen. At that point, such a product could easily compete with the Microsoft Surface, at least by way of being more attainable, if not having cool RFID and Bluetooth compatibility. The fact that there would be no need to release a wholly separate SDK and development environment means that existing iPad apps could have completely new applications on this gigantic form factor. Of course, considering this requires a jailbreak means that getting Apple to condone this project in any way just yet may be tricky.

All in all, this is a really sweet idea, and I hope these guys put their expertise to Android next. Table.Connect for iPhone is still in its alpha stages, but we’ll be keeping a close eye on development.

Android Apps to Help You During This Election

Today is a big day as folks get fired up for the mid-term elections, and there are plenty of resources...