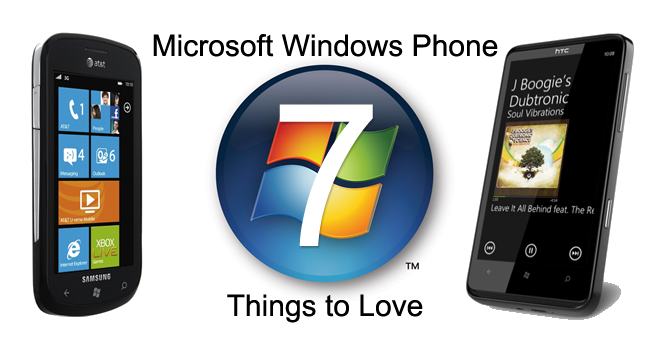 Windows Phone made a splash when it was finally unveiled after months of anticipation. The mobile OS will debut on a variety of handsets including a portrait

QWERTY, side slider, and a 4.3-inch multimedia powerhouse. Though impressive, the hardware is only half of the equation. The software behind this hardware is as important when assessing the competitive edge of a mobile platform.

We have spent some time with Windows Phone and have found 7 areas in which Microsoft’s fledgling OS is on par with and, dare we say, exceeds iOS and Android:

Windows Phone is a radical departure from Windows Mobile and the UI is completely revamped. The star of this new UI is Live Tiles, an iconic display of apps and real-time content. The Live Tiles are what you see when you first go to your homescreen. Each tile can be added and removed on the fly. They also can be re-arranged to meet your personal preferences. While some tiles are static, many tiles are dynamic and provide real-time data. A good example is the Live Tile from WeatherBug which will display the current weather conditions on your homescreen.

This part of Windows Phone was added to grab the army of gamers on Xbox 360 that want to carry their Xbox Live credentials around with them on their handset. Xbox Live is the largest online console gaming community in the world and the ability to plug into this community via your handset is awesome. If you are not impressed with the current Xbox Live offerings like Frogger, don’t get frustrated. Microsoft has a lot of room to grow and game developers will  link your phone to your console in creative ways.

Hubs are a conglomeration of similar data presented as a multi-page application.

There are several Hubs built-into Windows Phone including People, Music and Video, Photos, Games, and Office. The People Hub compiles all your contact information into one section. It is much more than a glorified contact list. You can see Facebook status updates, uploaded pictures, profiles and more from the people within your contact list.

The Hubs really set Windows Phone apart from Android and iOS as neither platform has anything similar. webOS has this idea with its Synergy concept but all the information culled from your online identities is buried within the contacts. It is not tied  together into one Hub that is accessible with a single click.

Windows Phone has an excellent camera interface. It has a brilliant startup feature that lets you launch the camera controls without unlocking your phone. You are all familiar with the drill. You spy a great shot, pull out your phone, unlock it, navigate to the camera app, and launch the camera. By the time you are finally ready to shoot, the 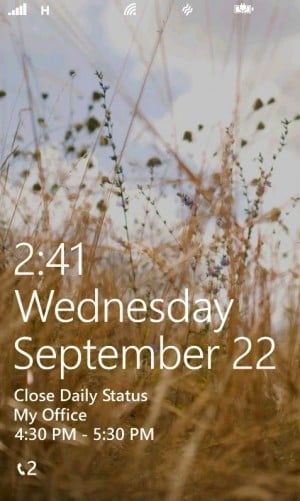 photographic moment is gone. With Windows Phone, all you have to do pull out the phone, hold the camera button for 2-3 seconds, and you are ready to shoot. The camera UI is slick and has that same Metro UI interface that offers left and right swiping. Once you snap a picture, it disappears to the left side of your screen and the camera controls re-appear. If you want to view your last picture, all you have to do is swipe left to right to get access to your picture. When you are done, you can get back to the camera by swiping from left to right. It is elegant, convenient, and a very well thought out interface.

The lockscreen may seem like a trivial thing but the first thing you see when you turn on your handset can leave a lasting impression. The lockscreen on Windows Phone is not just eye candy, it displays the time and date, an abbreviated list of upcoming appointments, the number of unread emails, the number of unread messages, missed calls, and more. It is so nice to get a glimpse of your information without unlocking your handset.

Windows Phone falls somewhere between the iPhone and Android:

Just the other night, my husband and I were talking about smartphones. What we like and dont like about the iPhone and Android. Several times, we came back to Windows Phone as offering something in between. It strikes me as being about right for someone who wants to use their smartphone, not be consumed by it.

Cloud Computing: My Phone and SkyDrive 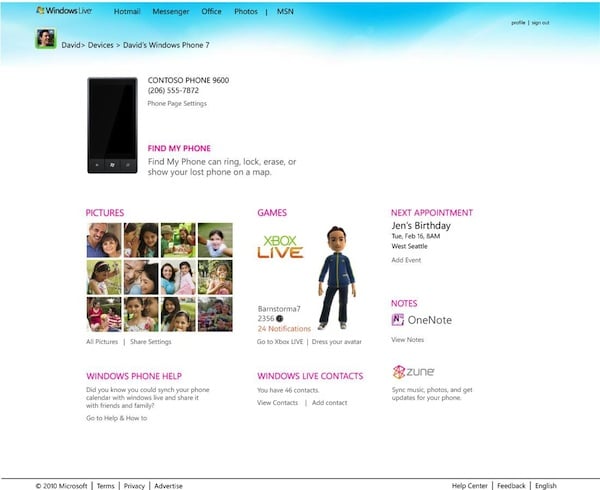 Similar to Apple’s MobileMe service, Windows Phone has a cloud component built into its OS. It has SkyDrive, an integrated backup and offline file service, and a remote service called My Phone. SkyDrive is accessible via a web interface and lets you share files with your handset. Photos or Office documents can be stored on your handset and automatically uploaded to SkyDrive for remote retrieval. SkyDrive provides you with 25GB of online storage and, best of all, is available for free.

Windows Phone is tightly integrated with Windows Live and has a dedicated portal within online service. The portal lets you access content from your phone including your calendar, contacts, Zune, SkyDrive files, Xbox Live, as well as the My Phone remote service.

My Phone lets you can ring your handset, lock your handset, erase your handset, and find your handset on a map using GPS. My Phone sends commands to your phone via text messages so you must have a valid phone number and cellular coverage for it to work. Both My Phone and SkyDrive set Windows Phone apart from Android and put it on par with the iPhone.

Overall, Windows Phone is a solid foundation and probably a better 1.0 version than Android, iPhone or even webOS. It’s fresh and elegant. It has room for improvement but most consumers, especially those on the Windows platform, would be happy with what the OS offers right out of the gate.

Speaking of needing some improvement, keep an eye out for our Top 7 things to HATE about Windows Phone 7 coming tomorrow.

Humans Might Become Part of a Mobile Broadband Network

Imagine becoming part of your mobile network. Everywhere you go, you're helping improve and boost signals where they might otherwise...