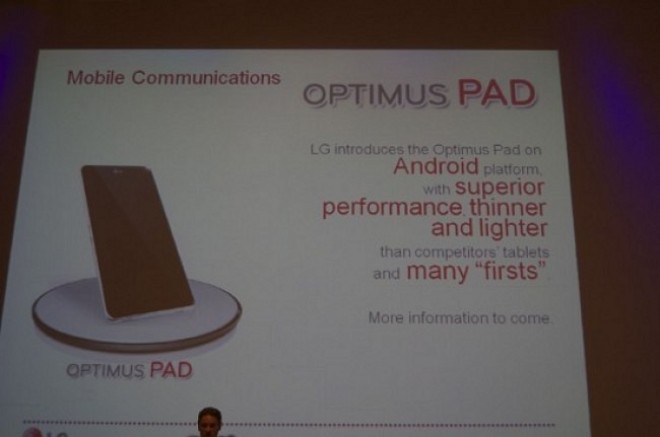 Finally, a mobile offering will be coming from LG that may not be too disappointing. After deciding to ice their Froyo tablet, LG will be waiting until early next year to unveil a newer, more powerful Android tablet powered by the still-mythical Android Honeycomb 3.0 OS. The “LG-Pad” will pack quite the punch when launched in the first quarter of next year, and if done right, will provide some nice competition to the iPad and Galaxy Tab.

The tablet will ship with an 8.9 inch display, NVIDIA Tegra2, and Android Honeycomb. As it stands, it looks like we may be seeing Gingerbread before the end of the year, but will have to wait a bit longer to get our hands on some Honeycomb lovin’. I like the idea of an 8.9 inch display, which could be prime for those who’d like something bigger than the Galaxy Tab, yet smaller than the iPad.

The LG Pad will be one of the many upcoming tablets to ship with an NVIDIA Tegra2 CPU, and we couldn’t be more excited. The thing demolishes anything we’ve ever seen before in benchmark tests without being overclocked, although some competitors do come close. With that kind of power under the hood and a tablet-optimized version of Android, LG could actually have a hit on their hands. We’ll also begin to see LG throwing the Tegra2 silicon into some of their smartphones, which signals that they won’t just have mid-ranged phones available. That’s relieving, to say the least.

It won’t be a runaway hit, however, as by the time the LG Pad launches, many other tablets will be hitting market. CES isn’t too far off, and we’re expecting to see more tablets than ever before on the show floor. From what we know, the LG Pad certainly has what it takes to compete in the spec department, but it could be a whole different story in the pricing department. The only way the LG tablet, or any tablet for that matter will be able to go head to head with the iPad, it will need to host a handful of awesome features while retaining an affordable price.

Will LG be able to do it? We don’t too much longer to find out.

Twitter is updating its Android app and the micro-blogging client is getting a host of new speed and performance improvements....