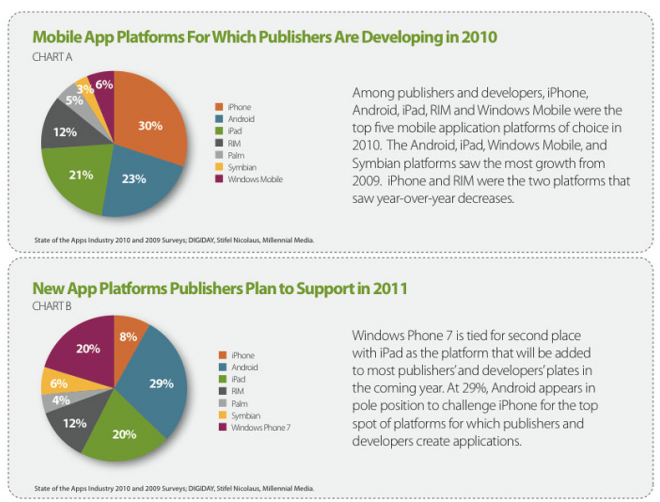 The iPhone is the most popular platform for developers right now, and that’s no surprise. Up until recently, the iPad came in second, but not anymore. Android has now taken the number two spot and the iPad has slipped into third place. With the growth of Android devices and tablets, developers will also follow. Additionally, with PayPal teaming with Google for Android, it might become easier for devs to get paid and for customers to actually purchase apps.

It will only grow even more next year as AppleInsider reports:

Developers surveyed also indicated in the “State of the Apps Industry” report that they plan to support Android in 2011, with 29 percent saying Google’s mobile operating system is the new platform they will embrace next year. Another 20 percent said they will expand to the iPad, and 20 percent also plan to write software for Windows Phone 7. A small percentage of developers — 8 percent — who are not currently writing for the iPhone will do so next year.

Android is the new platform developers will embrace next year? Apple ought to come up with something quick. Meanwhile, it seems that devs are having a lot of fun creating new apps and software for the Windows Phone 7 platform, so it’s going to be a full house next year coupled with webOS 2.0.

Rumor: Gingerbread to finish cooking and come out of the Android oven November 11th

A trusted source has tipped us to the potential launch date for Gingerbread, the 2.3 version of Android. According to...