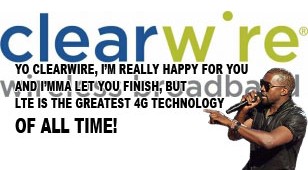 That mostly looks good, but they also say in the report that they’re stopping branded smartphone development pausing the creation of new Clearwire stores, and have laid off 15% of their workforce to make ends meet. This is all because there are “no assurances” that they can meet their short-term funding needs. Ruh-roh.

Lately, Clearwire has had to sell off a bunch of their spectrum, defend themselves against critics, and avoid the temptation to turn their efforts towards LTE. Sprint is dedicated to them, sure, but it’s not enough to keep Clearwire afloat right now; they’re even shopping around to T-Mobile since Verizon’s clearly not interested.

WiMAX has been going live in a number markets lately, including New York, San Francisco, and Los Angelas in order to expand their potential customer base, which would explain the significant cash drain. Their prepaid broadband service is a noble attempt at trying to keep service affordable, but with so few handsets supporting WiMAX (the Evo and Epic being the only ones), it’s going to be an uphill battle.

T-Mobile had a solid third quarter with 137,000 new net subscribers thanks to a strong performance with its smartphones like...