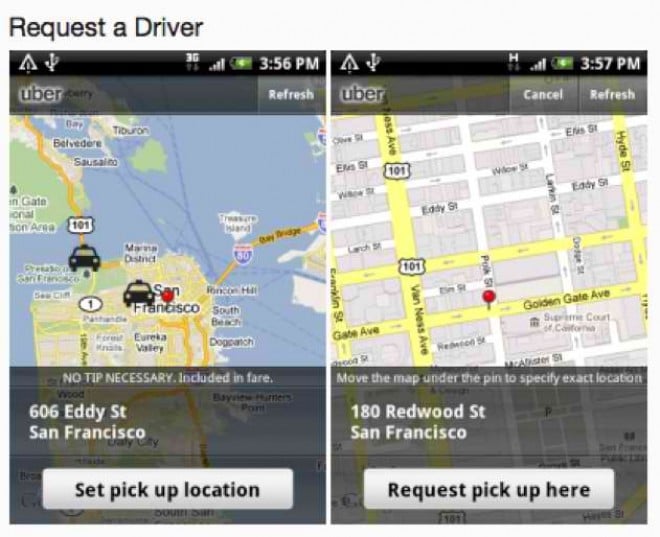 A new app has hit the Android Market that may leave some heavy weekend drinkers in heaven. It’s called Uber, and it basically takes care of your entire cab ride home. Uber basically allows you to hail, track, and even pay for your cab directly from your Android smartphone.

The popular iOS app hit the Android Market today, and it hosts many features that are simple yet very helpful. Right from the application you can request a cab, set your location to be picked up, pay for the cab if you have a card on file, and even rate your experience and share it with others. Hell, you can even track your driver.

Testing started a couple of weeks ago, and that’s where the Uber guys ran into some trouble. The SF Metro Transit Authority & the Public Utilities Commission of California sent out a Cease and Desist order, claiming that the service was marketing themselves as an actual cab service. They weren’t marketing themselves in such a way, since they did not hold the proper licenses, but their original “UberCab” name did ruffle some feathers. The company has since dropped the Cab part, keeping only the “Uber” portion, and there you go.

I’ve yet to try the app out yet myself, but it should come in handy at some point. There have been similar applications around in the Android Market, most notably Cab4Me, one of the winners of the first Android developer’s challenge. It’s a great app as well, but pales in comparison of Uber’s functionality.

This is definitely the app you want if you’re stranded somewhere you’re not familiar with for whatever reason, or you’re just too drunk to stumble your ass home after karaoke one night. Uber’s got your back.

The application is available right now in the Android Market for free, and you may want to go a head and  download it now so you have it at your disposal when you really need it.