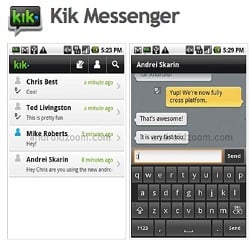 There appears to be a strong demand for the ability to circumvent the carriers for quick messages, as the Kik Messenger app for the Apple iPhone, Android and BlackBerry has just surpassed 1 million users in only a few short weeks.

The Kik Messenger app is downloaded to your Apple iPhone, Android or BlackBerry and then it will dip through your contact list and recommend contacts for you. These users will also have to get the Kik Messenger app but then you’ll be able to send free messages to others users. Think of it as a free SMS or IM client.

I can understand the appeal of a client like this but I’m still not blown away by Kik Messenger but that’s probably because none of my friends use it. I suppose it’s a good way to avoid paying for text messages but I use Google Voice anyways, so I’m not too concerned about that. There’s also no ability to do group chats or send media-rich messages.

If I were to use a service like this, I think I’d stick to textPlus, as it is more fully featured and it can even get you a number if you’re using it on a device like the Apple iPod touch.