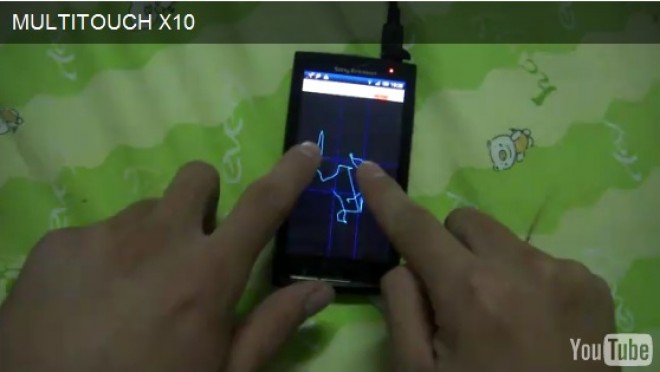 It won’t. It might. It won’t. One of the most unfortunate things about the Sony Ericsson Xperia X10, besides the fact that the phone was almost obsolete before it hit store shelves, is that the it doesn’t and won’t support multitouch. It’s been a long time coming, but some Android hackers have finally seen some progress in the multitouch department, just don’t expect it to actually, ya know, work well.

Judging from the videos below, it’s easy to see that there’s a lot more work to be done, if it can indeed be done. Right now, this looks to be more of a proof of concept more than anything else, but it’s definitely a start. We know that X10 users have dreamt of having full multitouch support on their phones, but if there ever is, it won’t be coming from Sony Ericsson. This isn’t very new, as Android hackers have been giving features to the community that we’d likely had never seen from the handset maker. So it’s not much of a surprise that SE had no part in this.

We hope to see some progress with this hack, but we’re imagining it will be quite hard to be able to get something working on hardware that simply doesn’t support it. Nonetheless, we’re getting somewhere, and that’s better than nothing. Now if the X10 could only get some Froyo on board, and not take forever.

The method to get this hack up and running is not currently available to X10 users, but we’re sure  it will be eventually. Let’s hope the guys who cooked this up are working on some refinements to get this out to the users as soon as possible.

Even with the videos showing poor results, if you own an X10, will you be willing to give it a try, even if it never gets better?

We've all been rather patient about the upcoming Meizu M9 and maybe it's because none of us have the intentions...