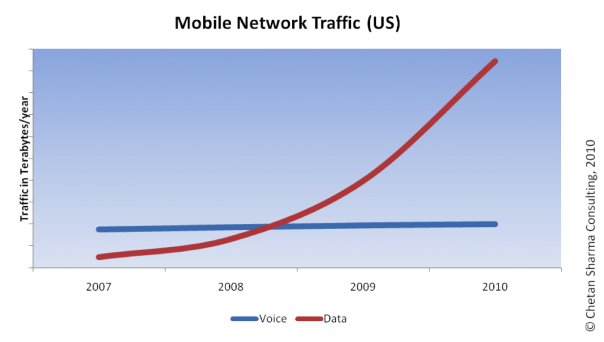 We all know that mobile data usage in the U.S. is skyrocketing, but the recent figures from analyst Chetan Sharma are staggering. Mobile data in the U.S. brought in $14 billion in service revenue in Q3 2010 alone and the data market grew 25% year over year. Smartphones lead the way but connected devices like tablets and wireless eReaders are also on the upswing. Connected devices grew 12% from Q2 to Q3 2010 and, within five years, revenue from connected devices is expected to exceed that of the entire prepaid market.

The report paints a rosy future for wireless carriers as the smartphone adoption rate is increasing and data revenue from these wireless devices is growing at an astonishing rate. Here are some other interesting figures from the report:

Interestingly enough, Chetan Sharma also predicts that Windows Phone 7 will push RIM aside and take third place behind the iPhone and Android.

[Via GigaOm and Chetan Sharma]

If you're an Opera fan and you're using an Android then we have some good news: the Opera Mobile 10.1...