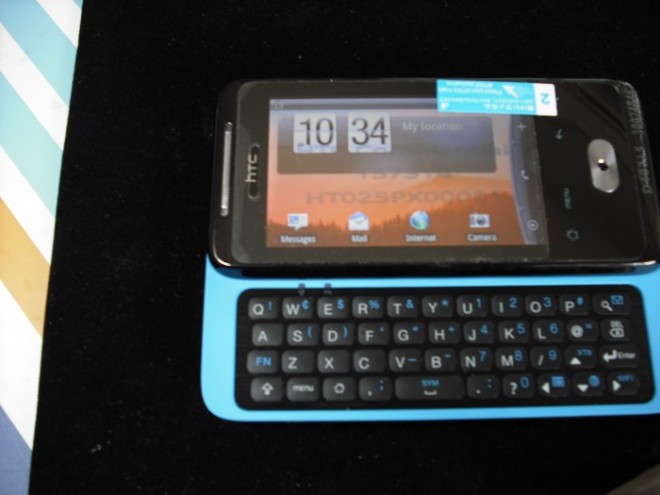 Ah, the HTC Paradise, it’s been so long since we last caught wind of this Android-powered QWERTY slider phone. Last time we heard of this handset, someone had actually bought the device, along with another unfinished HTC Android device, from Craigslist. We haven’t heard much since. Well, the FCC has outed this bad boy, and it looks AT&T bound. But, we have to ask ourselves, will it go the way of the HTC Lancaster?

From the looks of it, we’re only given a hint from what to expect. You can obviously expect a rather nice looking slide out QWERTY keyboard hiding under the likely 3.2 inch display. We could expect to see a slightly underwhelming 3.2 megapixel camera on the thing as well, but it may have been boosted to 5 somewhere along the way, as it does look most similar to the Aria.  The Paradise also comes with HTC’s Sense UI, to nobody’s surprise. While devices like the Paradise and Aria are miles ahead of HTC’s less-than-perfect phones, we’re used to seeing more powerful Android phones these days. So, we won’t be all that hurt if the Paradise never ships.

We saw the Paradise back in April, all done up in mid-ranged fashion, and now in November, the Paradise looks no more appealing. While we won’t complain if AT&T does actually end up getting this handset, we won’t be blaming anyone if they find this one dead in the water. That said, if HTC wants to focus on getting some entry-level Android phones out to customers, just like Motorola, so be it. Just don’t take forever, and give them some jazzed up styling, ok?

Whatever comes of the Paradise, one thing is for sure, it’ll probably be rather cheap on a two-year contract. We’re not sure if that’s enough to pass up on the somewhat decent Android phone selection AT&T now carries, but what’s just one more?

HTC may be looking to get an application store in the works according to a recent rumor. The Taiwanese company...