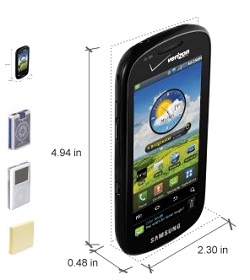 It looks like the Samsung Continuum is going to be here soon and Verizon has put up the user manual online as well as a demo website.

If you don’t know, the Samsung Continuum is an Android-powered device that should be similarly equipped to the Galaxy S device including a 1 GHz Hummingbird processor and a 5-megapixel camera with 720p HD recording.

Of course, the claim to fame of the Samsung Continuum is that is features a 1.8-inch screen underneath the main display. Think of this as a ticker which can display ambient information to you without having to power on your own screen – it can show you news, e-mail tidbits and other information. The user guide tells us that you’ll be able to show your weather, time, RSS feeds, e-mail and text messages on this ticket display.

The main screen will be a 3.4-inch Super AMOLED screen. It may be a little disappointing compared to the 4-inch display found on other Galaxy S devices but the ticker may hopefully make up for it.

The Samsung Continuum for Verizon should launch with Android 2.2 with TouchWiz 3. This makes the little, green robot a little more visually-pleasing and iPhone-like in appearance but I’ve found that some of this software can be sluggish. Let’s hope the company has ironed out the bugs.

There’s no word on how much the Continuum will cost but it probably won’t retail for more than $199 on a new, two-year contract. We’ve heard that it could be available as early as Nov. 11, so we won’t have to wait long.

Samsung is holding a media event later today and we’ll be there live to see what it unveils. There were some rumors that we’d see the Nexus Two at the event but it looks like the Continuum will be the only thing announced.

HTC Paradise spotted with Android at FCC, on way to AT&T(?)

Ah, the HTC Paradise, it's been so long since we last caught wind of this Android-powered QWERTY slider phone. Last...