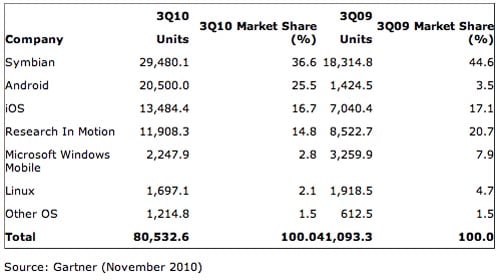 As if the past few weeks haven’t been enough for Symbian in terms of bad news, it looks like its market share is slipping and may soon take a back seat to Android. While Symbian still has the lead at 36.6% of the world’s smartphone OS market share, it has slipped from 46.6% last year during the third quarter. Meanwhile, Android has skyrocketed – unsurprisingly given the ubiquity of handsets and the fact that new ones seem to be getting launched every three minutes – going from 3.5% during 3Q 2009 to 25.5% in 3Q 2010.

For iOS, available on the iPhone, iPod touch and iPad, things have remained relatively stagnant. Last year, its market share during the third quarter was 17.1%, but during the same quarter this year it fell slighty to 16.7% despite continuing record sales of the iPhone.

So while Nokia and its favorite OS, Symbian, rule the boards for now, it looks like they will be relinquishing the number one spot to other manufacturers and operating systems as soon as just a year from now.

Of course, there’s a new player on board with Windows Phone 7, and it’s still too early to see just how well it will do against iOS and Android. We’ll also be seeing a good chunk of webOS 2.0 and MeeGo next year, making the list even more diverse than it is now. Exciting times are ahead for smartphone fanatics.

Poynt for Android and iPhone Spreads to Europe

One of my favourite apps, Poynt, is now available for iPhone and Android users in Italy, France, Spain, and the...