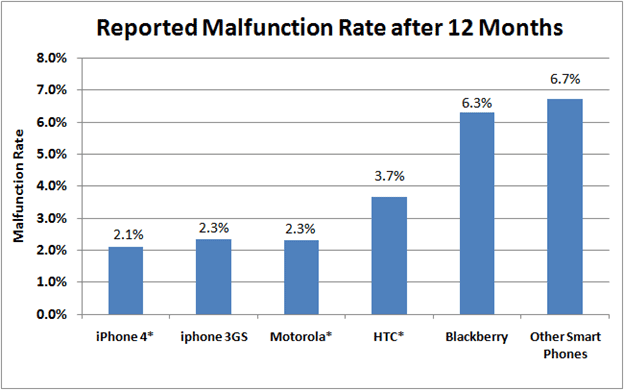 Square Trade, a company that makes money by selling consumers insurance on the expensive gadgets they buy to fill their techno-lust, has released a study detailing who makes the most reliable smartphones, and which devices are more prone to be damaged by accidents. In terms of random malfunctioning, meaning one day your phone just decides to not work one day, Apple came out on top with their iPhone 4 exhibiting only 2.1% of insured units having issues. The iPhone 3GS followed with 2.3%, which is also the same figure for devices manufactured by Motorola. HTC is next with 3.7%, then RIM with 6.3%, and finally “other” smartphones with a 6.7% failure rate.

Turning the tables, when it comes to devices that break due to an accident, such as dropping your smartphone on a concrete sidewalk, BlackBerry owners filed only 6.7% accidental damage claims. That number jumps to 12.2% for both Motorola and HTC devices, and with Apple, unsurprisingly, the iPhone 4 with the fancy new all glass body hits 13.8% while the 3GS fairs a bit better with 9.4% of insured units getting busted.

The sample size for this study was over 50,000 Square Trade members, so it’s fairly accurate. Yes, the company is trying to convince you to buy a warranty from them, but maybe that’s not such a bad thing? For people who upgrade their smartphone every 6 to 12 months, and I know I’m guilty of doing that, then buying an extended warranty doesn’t really make any sense, but for those of you who tend to keep the same phone for years on end … it still may not be worth it since after 2 years you’re eligible for an upgrade anyway. If you’re going to buy an extended warranty on anything, do it for something expensive, like a laptop. Smartphones, in the bigger picture, don’t really cost that much if you figure that it takes less than $2 per day of savings to buy a $600 handset every year.

Are you a die-hard iPhone fanatic? Do you spend more time in the App Store than the grocery store? If...