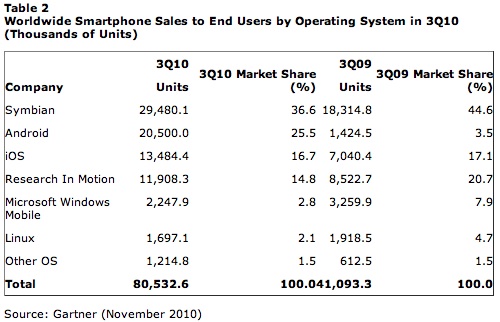 Highly regarded analyst firm Gartner has issued their Q3 2010 smartphone figures and the results shouldn’t really come as a shock to anyone. The smartphone category, pioneered by Palm, perfected by Apple, and made available to all social classes by Nokia, is on the up and up with over 80 million shipping during the third quarter of this year. That’s up 96% from the same quarter last year. With 417 million mobile phones shipped last quarter, that’s 19.3% of them running an advanced OS.

Symbian’s market share is 36.6%, down from 44.6% a year ago, meaning it used to be that almost every other smartphone ran the ugly, yet feature rich operating system. Now it’s 1 out of 3. The opposite is happening with Android, with Google’s mobile operating system estimated to have 25.5% market share, up from the pathetic 3.5% a year ago. In other words, out of every 4 smartphones sold between July and October 1 of them ran Android. Apple’s market share is down to 16.7% from 17.1%, which again isn’t a surprise since it’s an ultra expensive device and it’s only 1 model compared to the dozens of Symbian handsets that Nokia pops out. Our Canadian friends RIM hit 14.8%, down from 20.7%, and Windows Mobile is at 2.1% compared to 4.7% last year. It’ll be interesting to see how that changes now that Windows Phone 7 is out on the market.

It looks like the market does have space for multiple players, and any talk of a winner takes all approach is simply showing signs of ignorance. Even Steve Jobs himself, back when Apple was months away from going bust, said that Apple doesn’t need to beat Microsoft to win. They just have to be Apple. It’s also way too early to tell what’s going to happen. Everyone is refreshing their operating system at such a rapid clip that it’s hard to imagine what a device from say 2014 is going to look like.

A recent study done by the American Public Health Association on 4,257 students in an urban Midwestern school district shows...