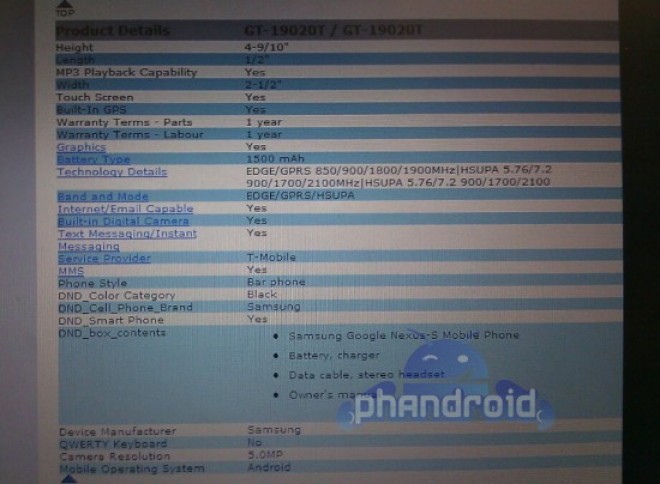 Ok, this is getting a bit ridiculous, as we now have yet another Nexus S story for you today. From real-life pictures of the Android powered smartphone, to display units shipping this weekend, the nearly confirmed Nexus S has been thoroughly leaked today. Well, turns out, another Best Buy document has been leaked, and it offers up some of the upcoming Android phone’s specs, some of which won’t be too pleasing.

While it’s not a full spec sheet, we now know that the Nexus S will come with a 5 megapixel camera, and is definitely T-Mobile-bound. As far as connectivity, here’s what the document says,

Notice anything missing right there? While this could change, there’s no indication about the handset’s support of HSPA+. You can file that under a big, fat fail if you ask me. While the Nexus S will come with Android 2.3, the G2 and MyTouch 4G will get the Android 2.3 Gingerbread update as well, both of which support HSPA+. It may not seem that big of a deal, but once you see just how fast T-Mobile’s “4G” is, you certainly won’t want to go back. Still, the Nexus S should be a rather decent phone, even if it doesn’t have the allure the Nexus One once had.

The rest of the document is pretty simple, and offers nothing we didn’t know already, besides what comes in the box. Nothing surprising there, either. The handset will come with a charger, data cable, stereo headset, manuals, and of course the phone and battery. So the Nexus S is about as real as it gets. It’s just too bad that it won’t knock any socks off. It’ll definitely be a welcomed addition to T-Mobile’s great Android lineup, but I’m still glad I got my G2.

So maybe Gingerbread wasn’t released today, but there’s enough of this device all over the place to distract us for now.