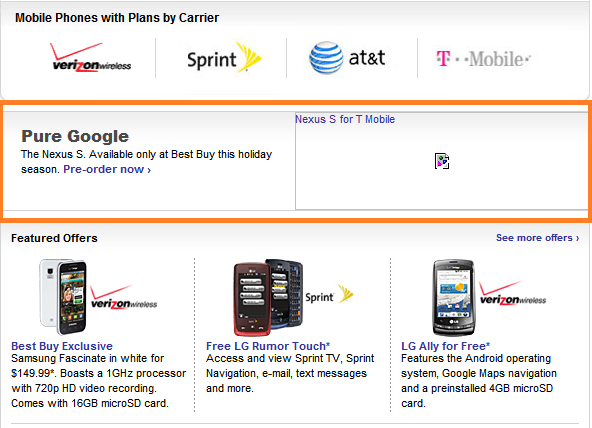 So much for Samsung not making a Nexus phone, eh? Best Buy Mobile temporarily showed the Nexus S as available from T-Mobile on their site, but has since been removed. Hit up the Google cache of the sighting if you’re at all skeptical about the screenshot above.

Details on such a device are skimpy, but the “Pure Google” headline and nature of the preceding Nexus One suggest that the Nexus S would be a “with Google” experience unhindered by custom software tweaks by Samsung. Previous rumours confirmed a forward-facing camera and suggested use of video chatting capability built into Android 2.3 Gingerbread, and a 4-inch Super AMOLED display.

The Nexus One has remained something of a control sample by which to compare heavily-customized Android builds made by smartphone manufacturers, but given the specs on the N1 are starting to grow stale, it may be time for something else, like the Nexus S, to provide the vanilla Android experience.  Is anyone itching for a clean-slate handset without the clutter that manufacturers feel compelled to include on Android, or do you find those customizations useful?