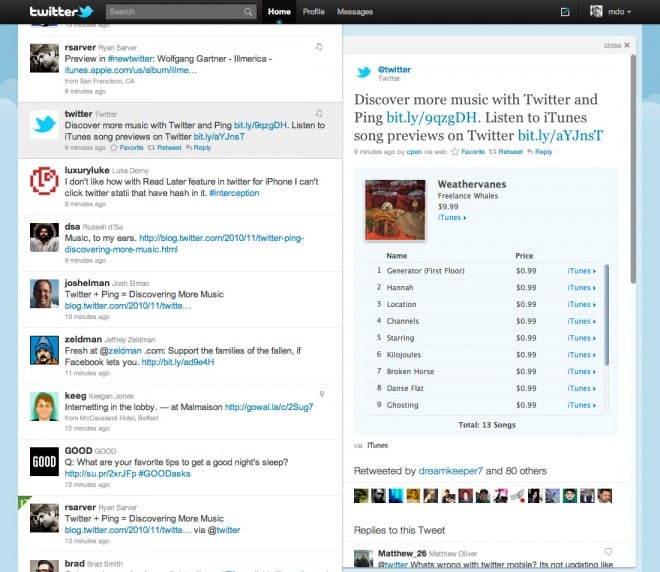 If you’ve found Apple’s Ping social network to be a bit isolated, you’ll be happy to know that Apple and Twitter are working together to help you spread your musical tastes.

If you don’t know, Ping is a social network based on music that is available on the iPhone, iPod touch and desktop that enables users to share their musical interests, as well as discover other new friends around tunes.

One of the beefs with the music-based social network is that it’s not social enough – it’s essentially isolated, as the Facebook integration was pulled early. It no longer lives in a silo though, as the micro-blogging company explained what this news means on its blog.

Once you’ve linked the accounts, whenever you Post, Like, Review, or tell your friends why you purchased a song or album on Ping, this activity will also be tweeted to your Twitter followers – complete with playable song previews and links to purchase and download music from iTunes.

When you click on a Tweet that’s sent via Ping or that contains an iTunes link, you’ll see the song or album in Twitter’s details pane, with the ability to listen to song previews from iTunes, making the experience even richer.

So, this could make Apple’s social network based on music a little bit more palatable and it could make it a stronger service. I’m still not convinced that it is enough to make me take another look at the service but it’s a nice start.

What about you readers? How have you found Apple’s Ping so far? Would Facebook integration help or is it just a lost cause? Let us know what you think in the comments.

‘Hulu for magazines’ coming to Android

It looks like we'll be getting a "Hulu for magazines" early next year but the digital storefront will be for...