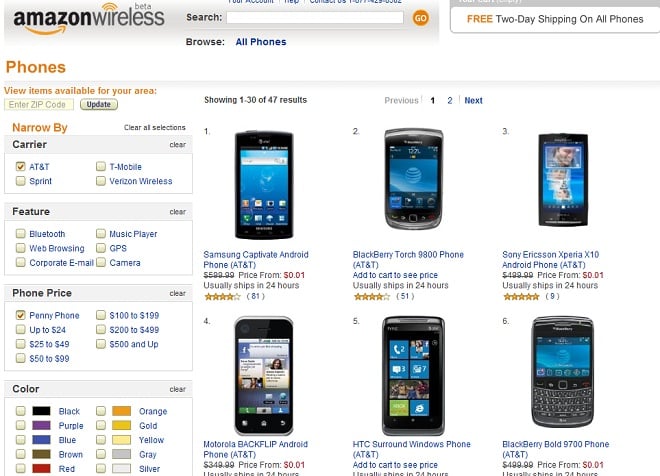 Amazon is well-known for its deals on smartphones but the online retailing giant is going nuts this weekend and offering many cool smartphones for a penny with a new, two-year contract. This penny sale includes multiple Android, BlackBerry and Windows Phone 7 devices.

The Amazon penny sale includes multiple cool phones on AT&T, Sprint, T-Mobile and Verizon and you can get multiple lust-worthy smartphones. Let’s say you’re a BlackBerry fan, well you can get RIM”s latest flagship, the BlackBerry Torch, for only a penny.

If BlackBerry isn’t your flavor and you want some of that little, green robot in your life, the Amazon penny sale has your back too. You can get the Verizon Motorola Droid 2 or the Droid Incredible for practically nothing.

If the Droid lineup isn’t your flavor, you can also get the Android-powered Captivate in the penny sale and many more.

The awesome thing about the Amazon penny sale is that it also lets you jump into Windows Phone 7 cheaply. You can get your hands on the excellent Samsung Focus and LG Quantum for just one cent with a new two-year contract.

What I love about the Amazon penny sale is that the online retail giant is taking much of the bullplop out of smartphone ownership. The $200 or so you pay for the actual handset is inconsequential compared to the amount you pay in data over the life of the contract but it’s still nice to get that extra bit of subsidy.

There are a ton of other feature phones that can be had practically for free and the Amazon penny sale should run throughout the weekend. Knowyourcell has compiled a list of all the smartphones the sale includes:

The apps just keep piling in for Windows Phone 7, and CardStar has hopped on the bandwagon with its mobile...