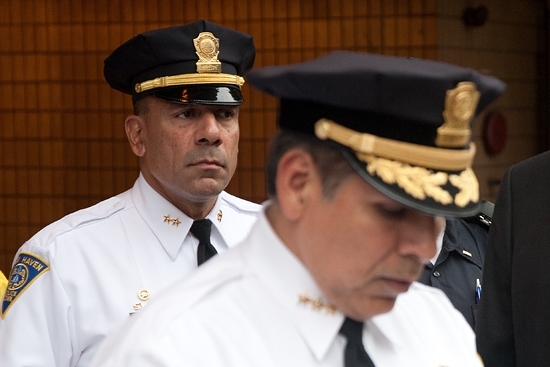 Another day, another case of abuse of power by cops unwilling to have their public police activities filmed by passersby with an iPhone, Android, or any other video recording device. This time around, we bring you the story of a Connecticut man who was recently arrested by New Haven Assistant Chief of Police Chief Ariel Melendez for the alleged crime of “disturbing the peace.” According to reports, Luis Luna was convicted of the crime after being approached by Officer Melendez, who asked Luna to stop using his iPhone to videotape police officers breaking up a fight on College Street. Luna also claims that the officers involved in the incident proceeded to delete the videos that he had just recorded with his iPhone.

According to the police report, Ass. Chief Ariel Melendez ordered the arrest of Luis Luna. “He began taking pictures and filming. Asst. Chief Melendez approached Mr. Luna and asked him to leave as well as stop filming. Mr. Luna did not do so. Therefore, Chief Melendez instructed me to arrest Mr. Luna,” wrote arresting officer Fitzgerald.

It’s not clear how using his iPhone to film police breaking up a fight is considered “interfering with police,” but that’s the charge for which Luna was handcuffed and placed in jail. What is clear, is that cops are clearly uncomfortable having their public actions filmed by citizens who, in most cases, have done nothing wrong (other than using their smartphone to record video). Even Melendez’s boss, Chief Limon agrees that filming official police activity is not a crime. “It’s not our policy to arrest people for filming,” Chief Limon is reported as saying by the New Haven Independent. “As a general principal, it is not illegal to video.”

Luna says that he was arrested and placed in jail for a night on charges of “interfering with police.” He also claims that cops confiscated his phone, claimed to not know anything about his iPhone, and later returned his phone with his recently recorded videos deleted from memory. He was later advised by the city’s District Attorney that he would drop the charge against him and instead charge Luna with the lesser charge of “public disturbance” – for which Luna had to pay a fine and officially admit to guilt.

We’re hearing more and more these days about abuses of power, arrests, and civil rights violations committed by law enforcement on citizens pointing their handsets’ camera lenses in a cop’s direction. Rather than staying true to their oath to serve the public good and uphold the law, it seems some law enforcement officials are afraid of getting caught with their crooked hands in the unlawful cookie jar by citizens armed with smartphones/cameraphones.

The problem, it seems, is that “Police are not used to ceding power, and these tools are forcing them to cede power,’’ according to David Ardia, director of the Berkman Center for Internet and Society’s Citizen Media Law Project at Harvard University.

What say you, law abiding smartphone/cameraphone user? Should there be laws protecting citizens’ rights when filming police activity in a non-interfering manner?

Android 2.3 Gingerbread will have NFC support for mobile payments

Google CEO Eric Schmidt showed off what is likely the Nexus S and said the next version of Android, Gingerbread,...