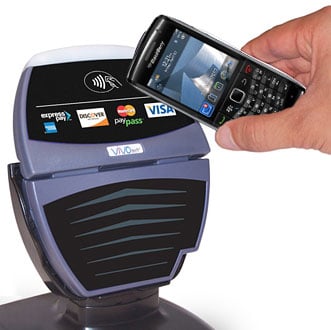 Aside from dropping the bomb that the BlackBerry PlayBook would have a module cavity to upgrade the tablet, RIM co-CEO Jim Balsillie also mentioned at the Web 2.0 summit that they’d “be fools” not to include near-field communications in a BlackBerry smartphone in the near future. To corroborate Balsillie’s mention, rumour has it that RIM is also involved with this ISIS NFC project that AT&T, T-Mobile, and Verizon are partnering on.

Near-field communications use an older wireless standard that you don’t see included in many phones – typically it’s what is built into ID badges that suits use to get through high-security doors, or some credits cards use it with PayPass recievers like the one above at retail locations. Nokia is talking about including NFC on more of their smartphones through a firmware update, but personally, I have high hopes for SideTap, which could potentially bring NFC to many handsets by packing it into a microSD card. PayPass receivers are common enough, so it seems a little excessive that we all have to wait on cell phone manufacturers to adopt the technology.

In any case, Balsillie’s interview where he mentioned NFC on BlackBerry should be available here starting tomorrow.