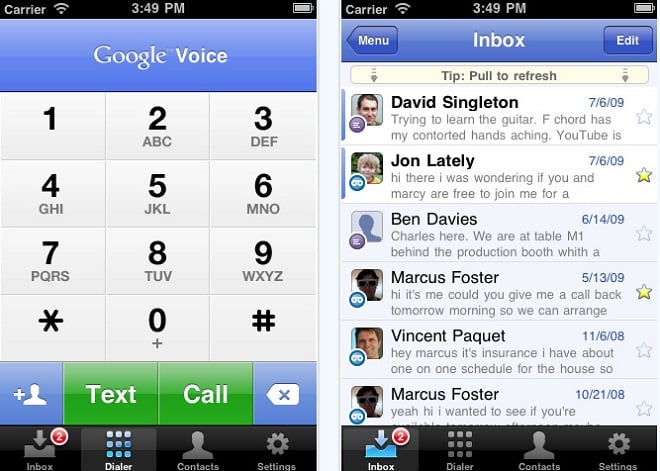 It’s been a long time coming, but you can now get the official Google Voice app for the Apple iPhone.

This isn’t a major surprise because third-party apps were let back in the App Store a few months ago, but this official version is free and it has support for the iOS 3.1 and above operating system.

Listen to your voicemail, read transcripts and manage your Google Voice inbox.

Call contacts from your iPhone Address Book or enter new numbers on the dialpad.

It’s the end of a long struggle between Google and Apple, as Steve Jobs’ company removed third-party apps related to Google’s calling service a year ago and it never even allowed the official app in the store. Apple claimed the call-routing app duplicated functionality and wasn’t allowed in the store.

This led to an investigation by the Federal Communications Commission and a lot of back and forth between the tech giants. Apple eventually relaxed some of its App Store rules and we now have the full goodness on the iPhone.

I’m still fully in love with the deep Google Voice integration on Android phones but the iPhone app is fairly well-done from what we’ve seen so far. The call-routing service is now free to all users in the United States, so you might as well give it a try.

Here’s a quick little video demo of getting Google Voice setup and running on your iPhone with the official “By Google” Google Voice app:

Google Goggles, T-Mobile and Others Partner for Marketing Experiment

Google Goggles has just launched an initiative with a few partners, including T-Mobile, Buick, Disney, Diageo (parent company to Guiness,...