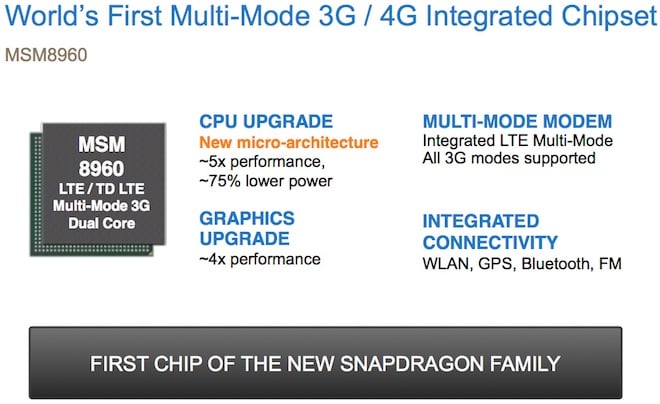 Qualcomm, manufacturer of a line of mobile processors known as Snapdragon that makes up the guts of almost every Android phone that ships and is also in 100% of Windows Phone 7 devices, has taken the lid off their future plans. Today’s Snapdragon chips are built using 65 nm and 45 nm transistors. That’s set to shrink to 28 nm in 2011, meaning that not only will the chips be smaller, but they’ll also use less power. Along with the smaller transistor size, there’s a new architecture that promises to be 5x faster than what’s out on the market today. The first 2x performance bump is due to the fact that the new chips will have two cores, the second 2x to 3x bump comes from said new architecture that’s going to compete with ARM’s Cortex A9 design that NVIDIA uses in their Tegra 2 and what Apple will probably use in their next generation iPad/iPhone.

Best thing of all, this new Qualcomm Snapdragon family supports LTE, so expect to see a lot of devices on the market in 2012 that will support Verizon’s next generation network. The MSM8960, the first chip to be a part of this new generation, begins sampling in 2011. It’s going to be a long wait, but once it hits the market, prepare for a whole new level of smartphones.

Greetings, earthlings. I'm pleased to report that my bud Martin Kool has gone ahead to complete his quest in completing...