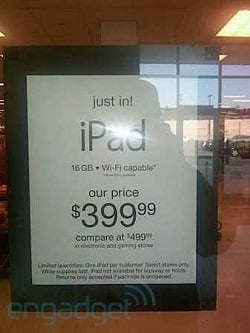 You know, when I’m hankering for some high-end electronics, I generally don’t go to TJ Maxx or Marshalls. Maybe I should reconsider that now, as the retailers will be offering the entry-level Apple iPad for just $399.

This is a solid deal, as the 16 GB version of the WiFi-only Apple iPad costs $499 at Apple stores and at most online retailers. When you factor in taxes and the optional Apple Care, I dropped about $650 for this tablet.

Going to TJ Maxx or Marshalls could have saved me a few clams but it seems like neither company will have a ton of supplies. The deals appear to be happening in select locations and this likely won’t be advertised too heavily.

TJ Maxx and Marshalls are likely just eating the costs of these discounts to get users in the store. That’s why these great deals aren’t in every store – the companies probably can’t afford it.

TJ Maxx and Marshalls are just the latest way that the Apple iPad is expanding its retail availability. You can now go to a Wal-Mart, Target, Sam’s Club, Verizon store, TJ Maxx, Marshalls and an Apple store to get one of those iOS tablets. The move comes as the tablet space is going to heat up and pricing and availability will become very important.

The Samsung Galaxy Tab has hit the market and it will soon be available in all four major U.S. carrier stores, as well as from U.S. Cellular and online retailers. Most research suggests that the Apple iPad will account for most of the tablet sales this year but Android could catch up over the next few years.

Research In Motion, Palm, Motorola, HTC and others will be jumping in the tablet game in the near future and this could also boost interest in this space.

The popular Apple iPhone app Instagram has been a big hit but Techcrunch is reporting that it has a security...