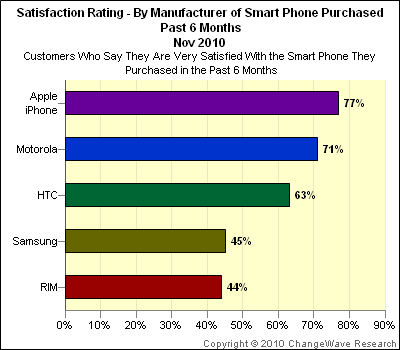 The iPhone is, not surprisingly, still tops when it comes to smartphone satisfaction, with Motorola and HTC following a close second and third place. A new customer satisfaction survey from ChangeWave shows that the Apple smartphone is still the most satisfying handset available today. Despite its issues with the antenna and concerns about the strength and integrity of the face and back, for the most part iPhone users can’t be any happier. However, other manufacturers are seeing increasingly satisfied users, such as Motorola, who is just underneath Apple in terms of user satisfaction. On the bleaker end of this survey, it looks like RIM and their BlackBerry smartphones are struggling to keep pace with the leaders.

According to the data from this smartphone satisfaction survey, HTC isn’t doing so bad for itself, coming in at a relatively distant third, but with devices like the EVO 4G, Droid Incredible and T-Mobile G2, I’d expect those numbers to go up in no time. Motorola is only trailing Apple by a handful of points, indicating that customers are increasingly satisfied with Motorola handsets.

There’s no doubt that Android OS has certainly helped manufacturers like HTC, Motorola and even Samsung. The pressure to make better hardware and use better components comes with wanting to deliver a solid overall experience with a capable OS. No one wants to be responsible for making an otherwise solid platform a terrible experience because the hardware was insufficient. I think that’s the realization that Android provided from the start.

Unfortunately for others, like RIM, it hasn’t been an easy battle. Manufacturers like RIM and Nokia have been dealing with aging platforms, and although customers have grown accustomed to those platforms, they’re also feeling like it’s getting a bit stale. Even on relatively decent hardware like the BlackBerry Torch and Nokia N8, it’s really the OS that is bringing them down.

[Update]
The survey included 1,212 smartphone users who had purchased a smartphone in the 6 months leading up to NOvember 2, 2010.