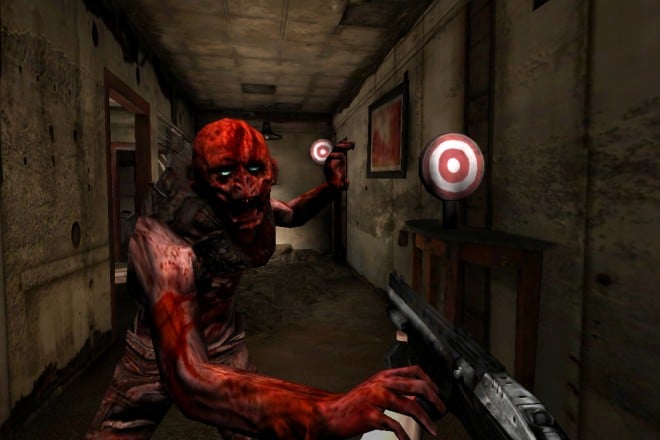 I don’t know about you, but I’ve been excited about RAGE HD ever since id Software debuted it this past August. The game ran at a smooth 60 fps with very little effort by id Software engineers and its graphics looked a lot better than the majority of iOS games that are currently on the market.

id Software released the first RAGE game for both the iPhone and iPad yesterday titled “RAGE HD” which takes players through a popular post-apocalyptic TV game show in the RAGE world, Mutant Bash TV, where players fight for big cash prizes. Should you spend your hard earned $2 for it? Find out in our review.

RAGE HD is an on-rails first-person shooter that has you playing the role of a contestant of one of RAGE’s most popular TV game shows, Mutant Bash TV. Think American Gladiators, but instead of Laser or Turbo trying to either push you off the top of a pillar or blast tennis balls in your direction, your competitors are mutants. Not just any mutants, but mutants that want to kill you at all costs. The game comes with three different episodes to play in: Tenaments, Asylum, and Bunker. Each episode contains a brief introduction from the game show’s host, J.K. Stiles, as he gives you the rundown of the upcoming episode. J.K. will also chime in from time to time while you make your way through an episode. 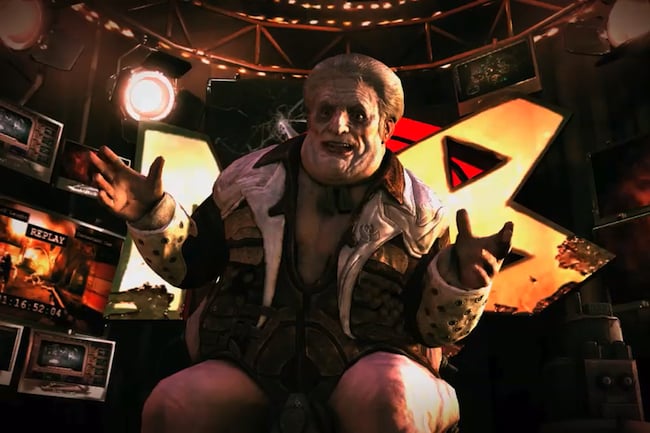 As you make your way through an episode, you’ll come across a number of bonuses that can be interacted with that add a nice change of pace other than going from room to room shooting the snot out of mutants. A number of targets will be available throughout an episode which allows you to rack up even more points. Also littered throughout each episode are a number of health packs, ammo, and Bash Bux. The health and ammo packs should be self explanatory as to what they do, but the Bash Bux are there to add more money to your final total. Since the game is on-rails, getting the items or targets can be quite a challenge, especially when there’s a group of mutants bludgeoning you repeatedly.

The mutants you’ll encounter offer a nice variation from one another and can be distinguished from one another by their specific characteristics. Some mutants will strictly stay away from you and attack you with bricks, or they’ll run right up to you and attack you with weapons or bare hands. Depending on the type of mutant that is attacking you, you’ll either receive a flurry of attacks that offer a small amount of damage, or huge, swinging attacks that will take a large amount. Regardless of the kind of mutant that is running after you, all of them require the same type of offense: Shoot the hell out of them FAST! RAGE HD offers three kinds of weapons to dispose of your enemies: Pistol, Assault Rifle, and Shotgun. The Pistol has an infinite number of ammo and serves as your backup weapon if you run out of ammo for either the Assault Rifle or Shotgun. I found the Assault Rifle was a great overall weapon, although when it came to up close encounters, the Shotgun reigned supreme in disposing of enemies quickly. 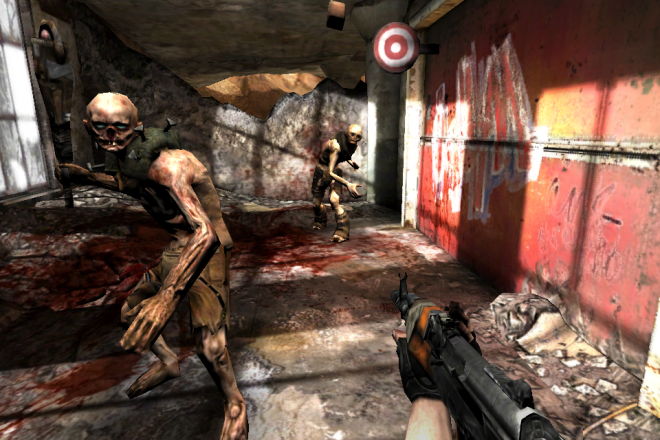 RAGE HD’s controls allow players to use either tilt or touchscreen to aim. The iPhone version by default chooses the tilt controls since the iPhone is very easy to maneuver back and forth, while the iPad version chooses touchscreen controls since the device has such a large real estate. Thankfully, both versions allow you to change your control settings if you prefer touchscreen aiming on the iPhone, or tilt aiming on the iPad, although I’d have no idea why you’d ever want that. The tilt aiming controls were spot on, although I never could get used to them compared to a touchscreen aiming control since I’ve become accustomed to PC and console first-person shooters. This isn’t a strike against RAGE, it’s just my personal preference. There are on-screen buttons for firing your weapon / picking up items, dodging attacks, reloading, and changing your weapon. The reloading mechanism in RAGE HD uses an active reload, similar to what you’d find in Epic’s Gears of Wars franchise. You can tap the button to reload as you normally would, or you can tap it again in the weapon’s sweet spot so you can benefit from double damage. If you miss the sweet spot, then your weapon will jam, prolonging its reload.

Visually, the game is absolutely stunning and it performs flawlessly on both the iPhone 4 and iPad. The game’s setting offers a glimpse of what is to be expected in the post-apocalyptic world once RAGE releases on PC and console sometime next year. In the meantime, I was pleased with how dirty and grimy the world and how absolutely terrifying its inhabitants can be. 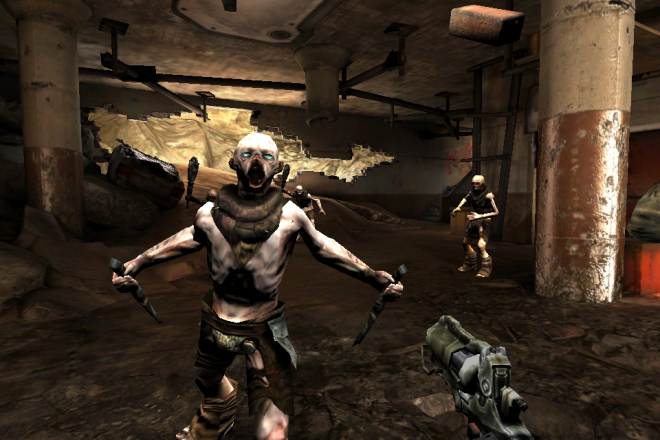 For this game being set in a post-apocalyptic TV show setting, I was surprised that id Software didn’t implement Game Center support so users could compare their scores through an online leaderboard with friends and other users. As fun as it is to play each episode over and over again to beat your previous score, this game could easily become even more addictive with the addition of leaderboards. Hopefully id Software could offer that in an upcoming update. I’m also hopeful the game receives additional episodes to play in either through a free update or in-app purchase. Either way, the more RAGE HD there is, the better off we’ll all be.

FINAL THOUGHT: If you own an iPhone 4 or iPad, you’ll want to pick up RAGE HD. Not only is it a fun shooter in a TV show atmosphere, but it also allows players to see just what their iOS device is capable of when it’s put into a well known and respected video game developer that’s known for pushing the technological envelope.

Dish Network is making a big push for TV everywhere, as the television provider is teaming with Dish to bring...