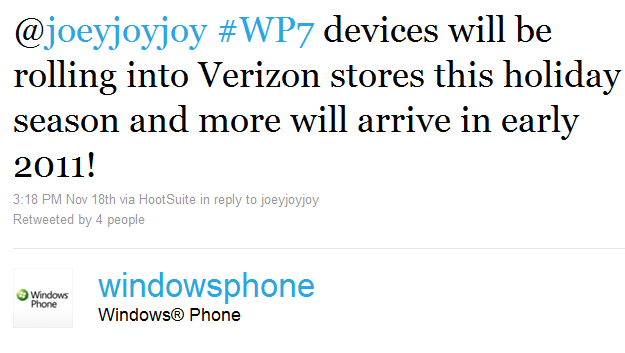 The official Twitter account for the Windows Phone team dropped a bombshell for WP7 fans on Verizon Wireless. According to a recent tweet, WP7 handsets may land on Big Red in time for the holiday season. This date is surprising as both Microsoft and Verizon confirmed shortly after the Windows Phone launch that handsets for CDMA carriers would not be released until 2011.

Microsoft made a big deal out of the this delay and confirmed that it all came down to time, or the lack thereof. Microsoft was coming down to the wire with its mobile OS and decided to focus on the core features of WP7 at the expense of tweaking its OS for CDMA carriers. While disappointing, the reason sounded plausible enough and CDMA customers with both Big Red and Sprint resigned themselves to waiting until next year for their Windows Phone handset.

If we assume the original tweet is correct, then this revised launch date throws a monkey wrench into Microsoft’s 2011 plans and leaves us wondering why the launch was moved up. Of course, it is entirely possible that someone made a mistake and the holiday launch date contained in this tweet is incorrect. 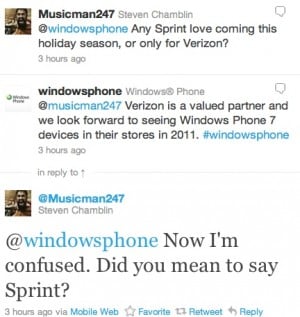 A more recent tweet from the same Windows Phone account contradicts this first tweet by claiming Windows Phone handsets will hit Verizon stores in 2011. This latest tweet is in response to a question about Sprint’s Windows Phone launch, so I am not sure which tweet applies to Verizon and I am not so sure the @windowsphone team knows either.

In the end, we have two tweets with two sets of contradictory information. Until Microsoft or Verizon steps up to the plate with some clarification, the launch date for the Verizon Windows Phone handset is still a coin toss. Heads for 2010 and tails for 2011 – any prediction which way it will land?

Retailers may have the corner on crowds, lines, and crazed shoppers but carriers are no slouch when it comes to...