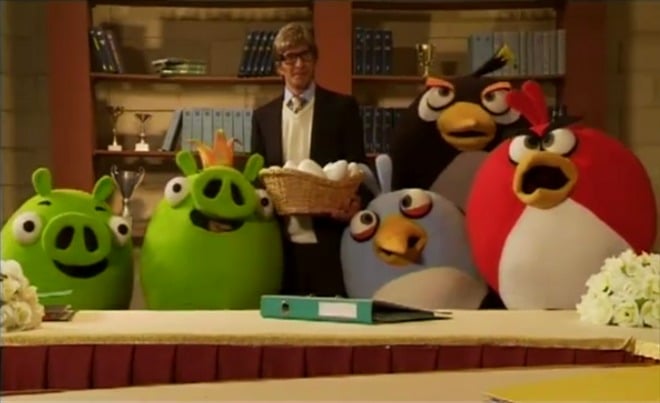 Angry Birds has found itself on millions of handsets between the iOS, Android and Symbian platforms, and after all the death and destruction, a peace treaty was called to resolve the great avian/swine war. With all the talk of crashing through wood, glass and concrete and eggs being stolen, the birds and the pigs met with an arbiter to see if differences could be resolved.

Of course, war is very profitable and a peace agreement would mean no more birds smashing through pig fortresses, which also means that we’d all have to, you know, do other things with our lives. How would I pass the time on the subways? What ever would I do while on cross-country flights? Watch in-flight movies?

Naturally, the Angry Birds Peace Treaty didn’t work out and the meeting just led to more death and destruction. It’s just the way we like it.

(As a quick aside, has anyone else wondered how much longer Rovio can milk the Angry Birds game before we grow tired of it?)

To see just how this whole mess transpired, see the video below.

Acer is stepping up its Android presence next year with tablets and a new 4.8-inch beast of a smartphone. For...