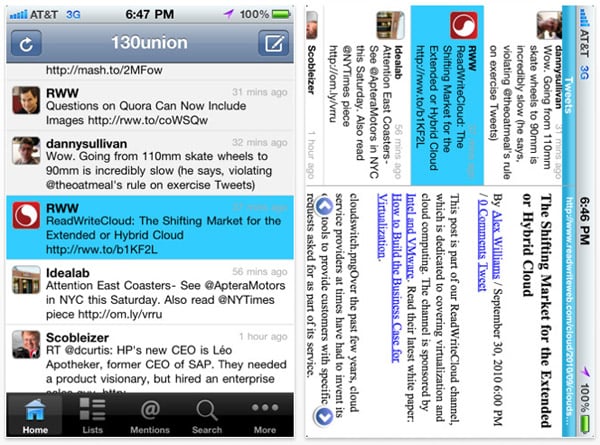 No longer a BlackBerry exclusive, UberTwitter is going for the iPhone users. Still in beta, the free to download application comes with standard Twitter features such as composing and sending tweets, retweeting, direct messaging and embedded link shortening. Moreover, there’s the so called UberView that makes reading tweets faster and easier. You can either tap the tweet in portrait mode or turn the phone to landscape mode to view and use content from any embedded link — whether it’s a webpage, photo or video — without leaving the app.

Thus far, UberTwitter has been downloaded by more than 9 million CrackBerry addicts who send about 10 million tweets a day. iPhone figures have just started rolling and apparently 10,000 users have already downloaded the application from Apple’s AppStore. The question is whether UberTwitter can repeat its BlackBerry success, given the fact there are other great Twitter clients available for the iOS platform. Moreover, now that they’ve embraced the iOS, will Android follow shortly?

We don’t know answers to those questions. We know that the final 1.0 release is scheduled for mid-December and it will incorporate many of the suggestions made by the beta users, as well as a number of other features.

The popular GPS and accelerometer enabled activity tracking tool Sports Tracker is now in version 4.0. I'm not sure such...