Back in October, we caught a glimpse of President Obama signing an iPad. He did so at a rally in Seattle, Washington… and the crowd was going wild for him, to say the very least. With the maiden ‘iPad signing’ in the books, I was wondering how long it would take for a second signing to take place… You can tell where this is going, right? 🙂

At the NATO summit going on in Lisbon, Portugal, President Obama was asked to sign yet another ‘magical device’. As you can see in the video above, the attendee approached the him, and asked him to kindly sign. President Obama replied with ‘Sign my iPad…I’ve done this once before’… Although, now that I’ve watched the video a few times, I’m not sure if he said ‘iPad’, or ‘iPod’… You be the judge.

Whatever the case, good on him for signing yet again. He sure is one charismatic president, don’t you think? To check it out, go ahead and hit the play button on the video above. 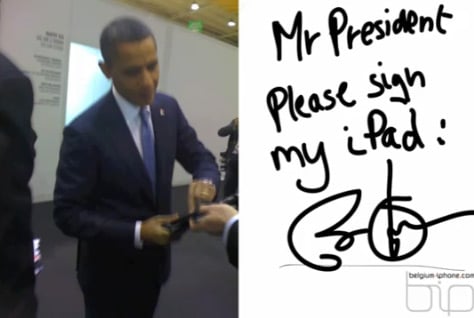 A company called Snapp! Designs launched iDigger - an archeological game for the iOS device users where the player can...