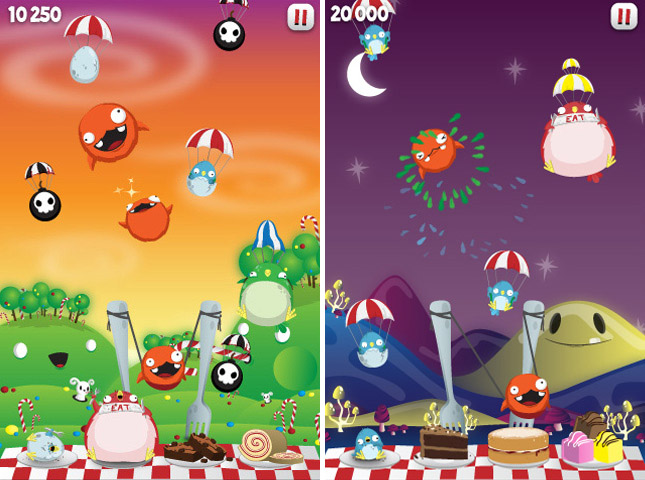 A company called Mediatonic is bringing its popular game MUST.EAT.BIRDS to the Android platform. The 99-cent download will definitely keep you occupied for some time, though not as entertained as Angry Birds would do. Like that was the case with Angry Birds, here you also use a slingshot, but instead of destroying pigs, you’re going for the birds who interrupt you while eating cookies.

MUST.EAT.BIRDS. takes place during the perfect garden picnic. Nomster is happily enjoying an array of fabulous cakes when an army of jealous parachuting birds launches an unprovoked attack. Hastily constructing a slingshot from his cutlery, Nomster bravely launches clones of himself at the invading avians to protect his precious cupcakes, sponges and Battenburgs. MUST.EAT.BIRDS. features play mechanics that combine the classic defend-the-bases design of Missile Command with the ball-bouncing physics of Breakout, providing a score-based game where timing your Nomster launches is critical to maximising combo hits as multiple birds make their descent. The Android version of MUST.EAT.BIRDS. features the same OpenFeint integration as its iOS predecessor, allowing players to track their scores with their friends and enemies alike.

Still not convinced you want to download? Maybe the following demo video will help. Enjoy!

The DLNA has certified a new Samsung device named Stealth V, which might turn out to be a Galaxy S...