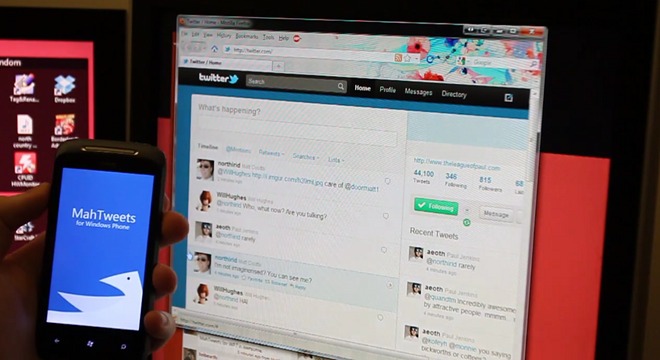 Windows Phone 7 is still such a baby platform with a long way to go in terms of refinement and app availability, but it looks like decent Twitter support is coming right along. MahTweets has taken matters into its own hands with a Windows Phone 7 app that supports push notifications for Twitter mentions and direct messages.

Nothing is more important than getting those mentions and DMs in a timely manner, and as the video below shows, it doesn’t take more than two seconds to receive a notification as soon as a tweet is sent out.

Here are other features that the app supports:

Perhaps the “no lists” for Twitter and “read only” for Tumblr is kind of a bummer, but it’s more than likely that those features will come with future updates. It’s good to see MahTweets jumping on the WP7 bandwagon and giving users a feature they’ve been longing for so quickly. Hell, it took Twitter for iPhone ages to get push notifications and here we are just shy of a month into Windows Phone 7’s life and it has Twitter apps supporting push notifications already.

Twitter has promised that this feature will eventually come to their own Windows Phone 7 client directly, but even then Mahtweets promises to be faster and more functional, guaranteeing that there will still be  a place for a 3rd party twitter client.

Sounds like a challenge to Twitter from MahTweets if you ask me. It’s this sort of challenge and promise that Windows Phone 7 users ought to hope for from other developers and companies if the new platform is going to have rich — and feature rich — applications. What makes or breaks a platform isn’t just its interface, design or intuitiveness, but also the breadth and quality of apps.

For Microsoft, it’s so far, so good in the third-party application space as it recently boasted over 3,000 apps and 15,000 developers on board the platform. As the apps and mobile OS continue to get polished as it grows, it could definitely take a small chunk of the market owned by Android and iOS next year.

Like clockwork, the Notion Ink blog has been updated to give us more details on the upcoming Android tablet, the...