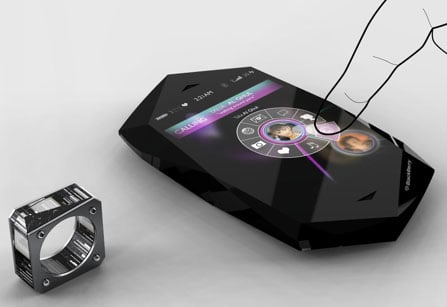 A neat concept for a BlackBerry phone called Empathy has been cooked up by designer Daniel Yoon, focusing on sharing our mood with friends. It’s a bit of a throwback to the early LiveJournal and MySpace days, which were all about updating mood statuses, but there are some interesting twists on old ideas here. The concept includes a high-tech mood ring which shares biometrics data with social networks. Not only can contacts see what kind of mood you’re in based information like blood pressure, body temperature, and heart rate, but message notifications on the Empathy would colour the whole surface of the phone reflective of the mood of their sender. That same device surface colour idea would allow the phone to go clear when idle and opaque when active.

The social networking aspect reminds me of the BlackBerry Enterprise’s Server free/busy lookup – except instead of seeing if your contacts available for a meeting, you can see if they’re in the right mood for a call. Some Android phones already do this by showing social network status updates on incoming calls from contacts, but the idea of that data being gathered passively is very new.

There’s also a new navigation mechanism based on a radial wheel surrounding contacts, and pinch-zooming to finding bundled people within certain subgroups, which you can see in action in the video below. A neat idea, so long as a more straightforward interface was also available. The phone looks like it has a screen on both sides (one with a stud-style keyboard), which would likely be a massive battery hog, but hey, we can skip logic for a cool idea.

The jagged, gemmy feel reminds me a lot of the old HTC Diamond, and acts as a fine representation for what the Empathy is aiming for; the design doc says “we are infinitely complex and impossible to summarize. A faceted form would be the appropriate analogy to our complex nature.” Cool idea, however unlikely it is to be made real.

Surprise: 90% of students admit to texting in class, 50% say no one notices them do it

A recent survey of 269 students from Wilkes University in Pennsylvania has turned up some results that you and I...