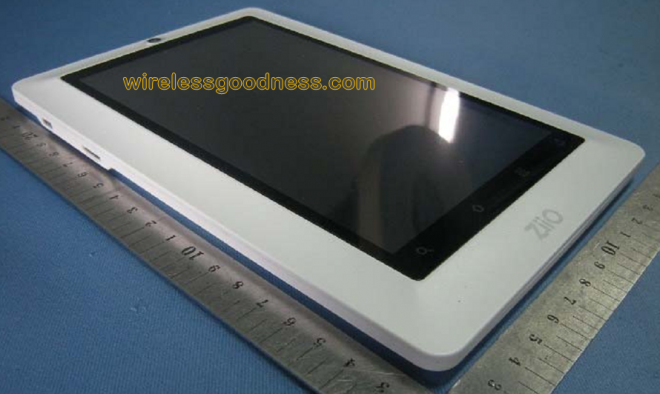 Some snooping around the FCC site has given us a glimpse at yet another Android tablet, and this time is coming to us from Creative Labs. Will this be one of the more desirable Android tablets headed to market in the coming months? Or are we going to see this thing hit the wall before it’s out of the gate?

The Creative ZiiO doesn’t have the specs to make us drool, and we’d have a hard time suggesting this to anyone without even seeing the device in person. This 7-inch tablet sports a 480×800 resolution resistive touchscreen display. That’s right, it’s a pressure-sensitive touchscreen. To make this tablet a little less interesting, Creative decided to throw Android 2.1 on the thing instead of Froyo, neither of which are optimized for tablets.

So what does make this tablet appealing?

You’ll find a front-facing VGA camera on the ZiiO, along with the expected WiFi and Bluetooth on board. It will also come with a Creative-made CPU, called the ZiiLABS HD processor, but little is known about it. The ZiiO will ship in two different versions, an 8GB version, and a 16GB version, both of which should be reasonably priced when released. The 8GB version will run you about $315, where the 16GB version will cost about $350. So the price points of the tablet will be fairly attractive. But, it remains to be seen whether or not the price points will be enough to stand out in the crowd?

Back in the day, Creative was one of the only decent competitors to the iPod with their Zen Micro and MicroPhoto. These were MP3 players, but they were designed incredibly well, and were really easy to use, too boot. Unfortunately, the Zen Micro may have been the best product to ever come out of Creative’s labs. We’re just hoping that this ZiiO tablet can fill those shoes. Who knows, maybe it will be a hit, but it will likely just join the ranks of the other cheaper Android tablets.

Either way, this tablet may be just what someone needs to perform the most basic of functions, but who knows how long it will be before buyer’s remorse sets in.