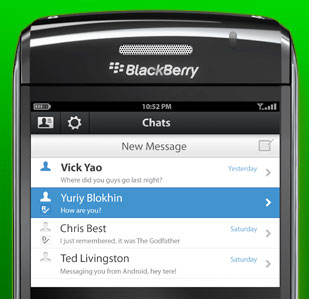 Hooboy, I think we’re starting to see why Kik Messenger was booted out of App World and had its developer tools revoked. As of yesterday, Research In Motion is suing the makers of the instant messaging app for patent infringement. RIM had said that Kik was breaching contractual obligations, and that they had tried to iron out a solution, but I guess that never happened.

Kik Messenger promised to bring the BlackBerry Messenger experience to other mobile platforms, offering sending, read, unread, and typing notifications as folks were chatting. Android and iPhone apps are still humming along, but RIM might not like that Kik is importing some of BBM’s selling points to the competition. If Kik eventually used the Social developer platform, it doesn’t seem like a far-off possibility that the app could become an alternative BBM client, thus bridging a significant gap with Android and iPhone. Personally, I think their music store had a lot more promise than this instant messenger, and if the whole app was permanently killed as a result of this legal action, I really hope the developers could focus more on it – that is, if they can stay in business afterwards.

I had an inkling that Kik was being particularly naughty if RIM was willing to pull the plug on an app that was getting a lot of popularity. Which patents Kik is infringing on is still something of a mystery, but considering the developers are based out of RIM’s hometown of Waterloo, Ontario, I wouldn’t be surprised if they knew a few programming tricks that maybe they shouldn’t.

It’s unfortunate that things have got this ugly, since manufacturers should have a healthy relationship with their app developers, but something has clearly gone awry in this situation, and I’m looking forward to finding out why.