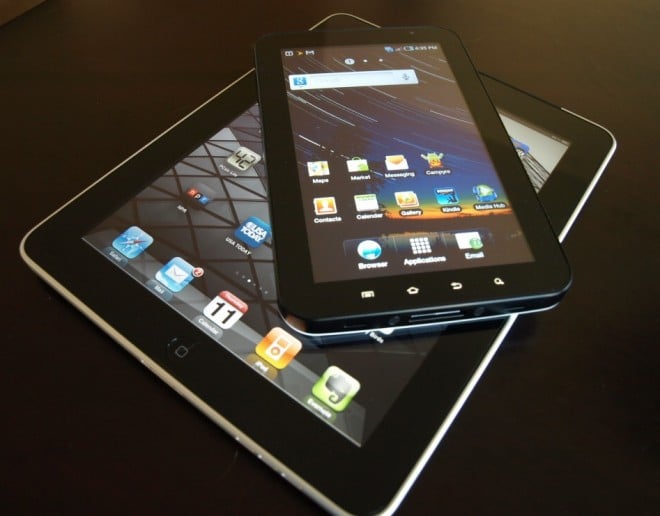 Just two months ago, we took a poll for the Apple iPad and Samsung Galaxy Tab, and our readers seemed to prefer the Android tablet over the iPad nearly two to one. However, in a recent survey conducted by Piper Jaffray, it seems that 85% of users actually prefer the iPad and see more value in it than the Galaxy Tab.

Of course, the survey isn’t entirely conclusive and the sample size was relatively small. There were only 65 consumers surveyed, but the results are interesting nonetheless. Although Samsung had a strong start with over 600,000 Galaxy Tab units sold worldwide in its first month, the iPad is still king of the tablet market. The latest survey shows just how strongly perception is skewed in favor of the iPad, which also happens to be Oprah’s most favorite thing this year.

In terms of price and value, consumers thought both tablets were overpriced, but still placed more value on the Apple iPad. As we can see in the image above, the price of an Apple iPad 16GB with 3G capabilities is $629, but on average, users felt that its true value was closer to $417. The Samsung Galaxy Tab, which is currently not available in a Wi-Fi only model like the iPad, costs $599. Users surveyed believe that the value of the device is roughly about $283. Between the two, it seems the consumers believed that the iPad’s value was nearly 70% greater than that of the Samsung Galaxy Tab.

Despite the results, there is no doubt that the Samsung Galaxy Tab will continue to do well in the next few weeks because of the holiday season. However, it might not do as well as Samsung had hoped given Oprah’s gigantic push for the device. While it may not seem worthwhile to mention her endorsement, the woman commands more power than most of us tech geeks realize. Authors have become stars in the literary world whenever Oprah recommends a book, and I’m predicting the Apple will see a boost in iPad sales over the coming weeks with both the holidays and her recommendation combined.

If you’re struggling to decide between the two, take a look at our comparison poll here. Also, your best bet is to go into an Apple store and a carrier store to try both devices out for yourself. While the results of this survey might seem conclusive, let’s not forget that only 65 respondents were questioned. Piper Jaffray could have skipped over this entire survey altogether.

RIM has acquired well-known Swedish design firm The Astonishing Tribe. TAT has done a lot of mobile work in the...