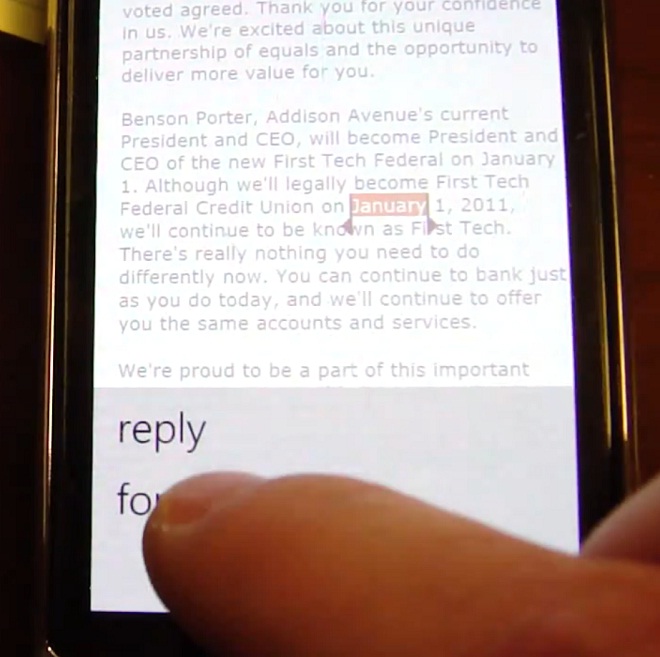 We all know that Microsoft Windows Phone 7 is a pretty good mobile operating system that is still lacking a few features that the iPhone and Android have. One of those is copy and paste but that will be soon fixed in a software update and a new video shows how this will work.

As you can see from the video below, the copy and paste on Windows Phone 7 looks pretty good. You simply grab the text you want and you’ll be able to throw that into different apps like the e-mail messenger and other programs.

It’s not much of a surprise, as Microsoft said Windows Phone 7 would get copy and paste in early 2011. It’s kind of odd this didn’t come with the platform at launch, as it comes preloaded with Office and you can already select text.

Windows Phone 7 is about to get a large software update in January that will add this feature, as well as give it support for CDMA networks. That could be a major driver of the new platform, which hasn’t been a blockbuster success yet out of sales.

I don’t use copy and paste that often but on those rare occasions when I need it, you really do miss it. This will also take away a major point away from Microsoft detractors.

Apple’s iPhone was also vilified for not having this ability for its first few versions but I found its implementation in iOS 3.0 was pretty darn good and elegant.

HTC 7 Trophy to land on Verizon Wireless in January?

Last month, a leaked promotional flyer hinted at the early 2011 launch of the Windows Phone HTC 7 Trophy on...