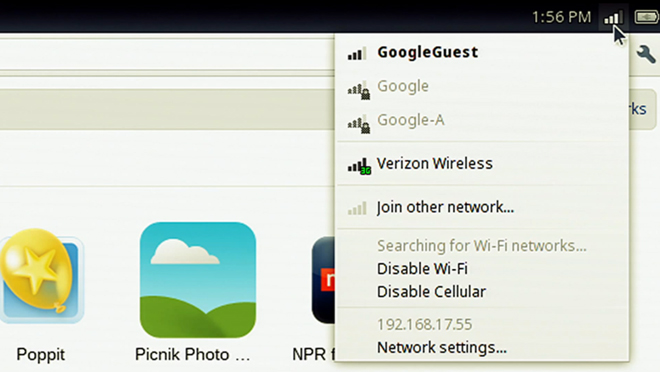 A little over a year ago, Google announced its intention to transform its web browser into a full-blown operating system in and of itself. Today, they’ve kicked off a pilot program in the U.S. where they will lend out laptops with 3G connectivity over Verizon to a select group to try it all out and gather feedback. The Cr-48 laptop has a nice 10 second boot time, 8 hours of battery life, 8 days standby, 12-inch LCD display, and weighs about 3.8 pounds. Interestingly enough, they axed capslock and function keys. Though the hardware is exclusively for testing and won’t see production, Samsung and Acer are on board to make some Chrome OS notebooks at launch.

The main pitch for Chrome OS is having an entirely web-based operating system – apps are all pulled down from the cloud, and as such, you could log in to any Chrome OS computer and get everything as if you were on your regular machine. Apps are hosted online, open as separate tabs, and are completely contained independent processes that won’t effect the others that are going on. That being said, the apps probably fall short of your usual expectations for computer applications, but for most folks, web apps offer all they need; just consider how much you use YouTube, Pandora, and Gmail. I suspect that having a whole operating system dependent on this scheme will promote the growth of a new generation of potentially mobile-friendly web apps. Apple relied on web apps in the early days of iPhone, but it’ll be curious to see someone use the same strategy for the long haul.

Since it relies on an internet connection, all Chrome OS laptops will have 3G built into them, but that could be bad news if you’re outside of cellular coverage or a Wi-Fi zone, nevermind if there are any technical difficulties on Google’s end. Now, Google also says that “Chrome OS is designed to work across a wide range of screen sizes and form factors, enabling our partners to deliver computing devices beyond notebooks,” meaning we could easily see this OS on tablets, or hey, even phones in the future.

Now, I’ve got a question for all y’all. As is, this is a little outside our usual sphere of cell phone coverage. Yeah, there’s 3G data involved, and Google’s participation leads us to wonder about how Chrome OS will play with Android, especially in the tablet arena, but the hardware is distinctly portable rather than mobile. Some would even say the iPad is outside of what qualifies as mobile. We all love our technology, but is Chrome OS, and netbooks/mobile broadband something you really want to see on IntoMobile? We’re more than happy to cater to the demand if it’s there, but if not, maybe our time would be better spent sticking with our established focus on cell phones. Drop a comment, and let us know what you’re interested in.

If you’re really digging the look of Chrome OS (shown below), you can sign up for the U.S. pilot program here, or get more details at their minisite.