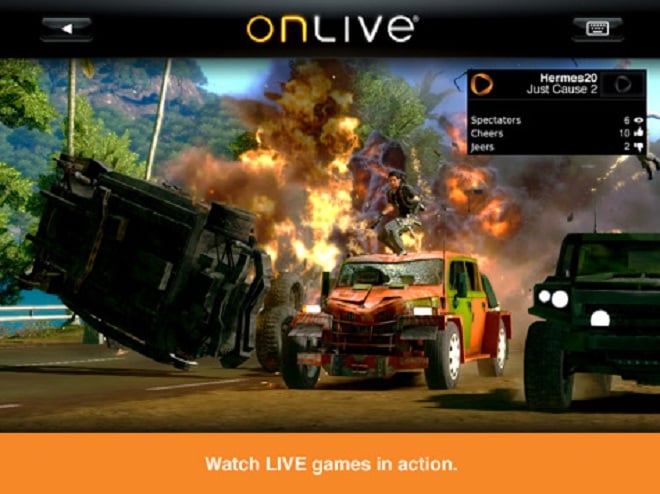 The OnLive on-demand gaming service has just released an app for the Apple iPad and the Samsung Galaxy Tab which enables users to watch others playing video games. While that may seem a little odd, this foreshadows a future which could turn your tablets into fantastic gaming machines.

If you don’t know, OnLive delivers cloud-based gaming to your TV, computer and, now, to your mobile devices. The promise is that you don’t have to have the highest-end hardware to play the latest games as it’s delivered over the cloud to your device for a fee.

The OnLive Viewer mobile program lets you be a live spectator while others are playing and it also has some social networking features.

“The OnLive Viewer mobile App is the last piece of the puzzle to unify the worlds of TV, computing and mobile all under one real-time cloud-based platform, enabling previously inconceivable experiences, capabilities and live, video-rich social interaction,” said CEO Steve Perlman in a prepared statement. “Today we showed the tip of the iceberg for what you’ll be seeing from OnLive, delivering high-performance gaming, entertainment, enterprise and Web applications wherever and whenever people want them, on virtually any device.”

While this app may only appeal to hardcore gaming fans, it paves the way to turn your iPad or Galaxy Tab into a fantastic gaming device. The company said that full game play capabilities will be coming in future versions of the app.

It’s not just games either, as the OnLive app could potentially bring other high-end processes to your tablet. The company will be showed off Autodesk Maya, Flash, Silverlight and Windows 7 running through the cloud on the iPad and Tab.

What games are you most looking forward to with this service?

You can download the iPad app here from iTunes and you can search for the program in the Android Market.

LG and VMware bring enterprise to Android with virtualization

LG and VMware are partnering to bring Android to the enterprise using virtualization. VMware announced its Mobile Virtualization Platform back...