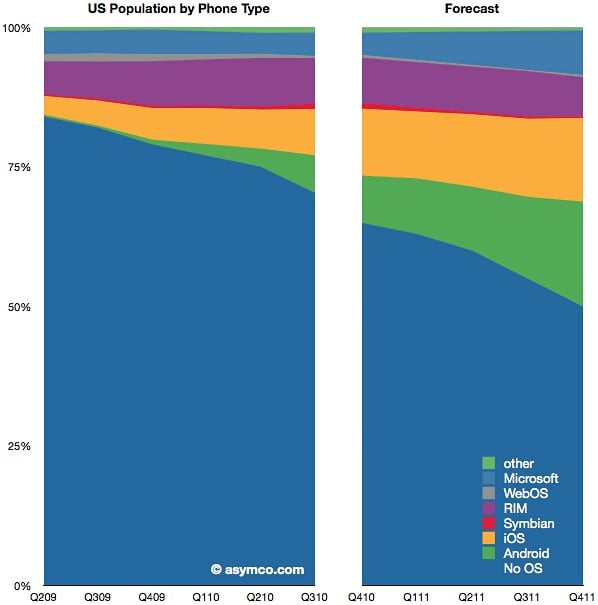 60.7 million people in the U.S. owned smartphones during the three months ending in October, up 14 percent from the preceding three month period, representing 1 out of every 4 mobile subscribers.[…] Despite losing share to Android, most smartphone platforms continue to gain subscribers as the smartphone market overall continues to grow.

That’s just about one-fifth of the nation’s population on smartphones, so it’s easily imaginable that half of mobile users alone would be using some kind of smartphone by the time 2011 is over. According to Asymco, “One in three of all phones in use will be either iOS or Android. That adds up to about 80 million users; up from 35 million today. Overall, 120 million Americans will be using smartphones.” The fact that iOS or Android will make up a third of all phones in use just shows how critical this year has been in making strides in the American smartphone usage. Microsoft admittedly missed the boat and skipped an entire generation.

As you can see from the chart above, based on the predictions it seems iOS and Android will own a chunk of the market by the this time next year. Of course, MeeGo isn’t shown – though it may be fair to say it can fall right into the “other” category – and it’s also difficult to predict just how well Windows Phone 7 will do. While Microsoft isn’t disclosing sales numbers for the first month, it still has room to grow.

The big blue chunk on the bottom that falls under “No OS” is gradually shrinking, and so the trend towards smartphone use is bringing a lot of new technology with it, like NFC. We also learned yesterday that most smartphone users prefer receiving breaking news on their mobile devices.

It would also be interesting to see just how much smartphone usage varies by city size and density. As a personal and non-scientific observation, I’ve noticed that in cities like Los Angeles, San Francisco and New York, there are far more smartphone users than when I’m visiting smaller cities. Seeing Android devices and iPhones everywhere next year would be a pleasant surprise.

Popular twitter application, Touiteur, has been updated to version 2.0. The application supports widgets and is one of the top...