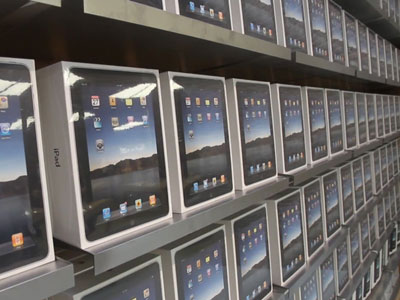 When you think of a housewife, your mind conjures up stereotypical images of home-cooked food, a loving home, and clean linens. In China, this congenial image is being perverted from loving homemaker to international smuggler. According to a recent report, customs officials have detained 14 housewives suspected of smuggling electronics into China. The seized bounty reportedly includes 88 Apple iPads and 340 mobile phones, a treasure trove estimated to be worth of 950,000 yuan ($143,000 USD). One suspect had 85 mobile phones in her possession; 65 were strapped to her waist and 20 more were concealed in her handbag.These women were chosen by professional smuggling rings because of their unsuspecting appearance and were being paid a mere 200 yuan ($30 USD) per run to smuggle items into China.

The  Chinese grey market is a multi-billion dollar industry with smugglers using creative means to bring highly coveted devices into the country. The iPad 3G is at the top of this list because it not yet available for sale in the country. The WiFi-enabled iPad is available from Apple stores in China, but the 3G version has yet to land on Chinese soils. Also high on the smugglers list are Nokia phones and Chanel perfume. Smugglers capitalize on demand and offer the goods at prices lower than the MSRP, an 8GB iPhone 4 will cost $643 on the grey market and $751 from an official channel. The iPad shows a similar reduction with a 32GB WiFi-only model available for $604 off-retail and $720 from retail stores.

While large smuggling operations like the one above won’t cease, smaller operations may be slowed down by a recent tax that has been applied to iPhones and iPads brought into the country. Under Chinese custom regulations, phones and microcomputers brought into the country, even for personal use, may be subject to a 20% tax. In the past, customs officials have been lax on enforcing this tax, but recent reports suggest officials may be tightening up the rules. Not only does this tax cut into the profits of those openly smuggling goods one or two items at a time, this tax also offers an incredible source of revenue for the government. In Zhuhai alone, customs officials discovered and taxed 446 mobile phones and 102 tablets that ere not declared by travelers. Most of these undeclared goods were Apple products.

The nice thing about the companies behind some of the most popular mobile applications, like Evernote, is that they get...