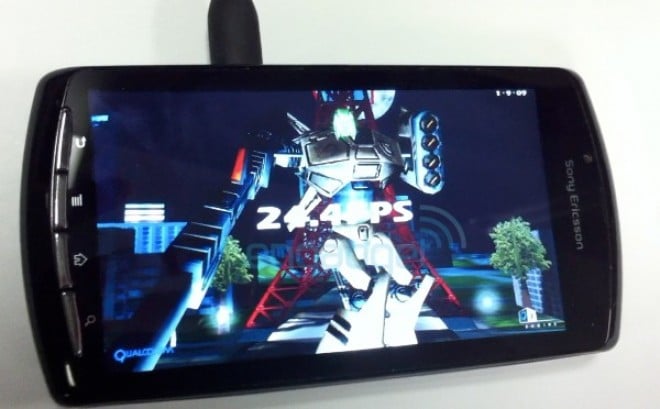 The mysterious PlayStation Phone (PSP) we’ve seen popping up left and right has finally sat still enough to get some benchmarks out of the thing.  We know the Android gaming phone has been floating around is a  prototype, so we’re hoping that the benchmark scores that come with this will get a bit better when the hardware and software are finalized.

My T-Mobile G2, which is running at normal speed and not overclocked got a score of 57.4 FPS. This PlayStation Phone prototype got a whopping 24.4 fps, which is not only unimpressive, it’s downright disheartening. This is likely due to the fact that it’s nowhere near finished, and we’ll be seeing some much better benchmarks out of this thing by the time it officially launches.

Using the most common GPU benchmarking app for Android, Neocore, the PlayStation Phone has a way to go before it will start appealing to the real geeks out there. I mean, we’re talking about a true gaming handset here. If the March 2011 date stays true, then Sony Ericsson has its work cut out, but we’re sure they can get it up to speed in no time … hopefully.

We have little doubt about the PlayStation Phone in that it will be nothing short of a massive hit. Blending two worlds that previously have yet to be so integrated, the PlayStation Phone will certainly turn some heads. I personally will probably never own one of these bad boys but that’s only because I don’t take my gaming as seriously as I used to.

The main factor for me would be the selection of games. Would these be PSP-only games? PlayStation originals? Would I be able to load content I downloaded off my PS3 onto it?

We’ve got some time to figured all of this out, so Sony Ericsson, get to getting those frames per second higher.

Electronics Arts is making a big push for social gaming on the Apple iPhone, iPod touch and iPad by bringing...