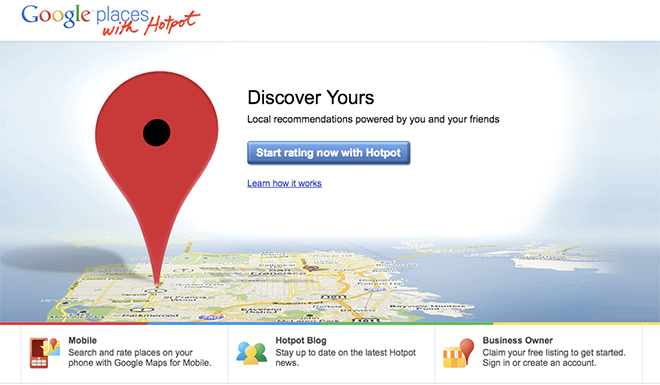 Google confirmed that Hotpot will kick off in Portland, Oregon over the next few months. The social recommendation engine for local restaurants, bars, and other businesses will include NFC-enabled window decals as part of the Hotpot business kit. These decals will be distributed to participating businesses, who can install them in a visible location within their establishment. Customers with a NFC-enabled phone, like the Nexus S, will be able to place their phone above the window decal and retrieve all the information about this particular establishment. Fumbling with the camera to capture a QR code is now made obsolete with this clever use of NFC technology.

So what exactly is this “Hotpot” service that is going to take Portland, Oregon by storm? The awkwardly named service adds a local recommendation engine to Google Places. Places, in a nutshell, is the business version of Google profile. Using the Places’ editing feature, a business can customize the information that appears on Google Maps and the Places page. Business can add information such as store hours, images, promotions, coupons, and so on.

Hotpot now adds a recommendation engine on top of this business directory. Hotpot will let you rate businesses as well see ratings made by your friends. It is similar to Yelp, but is tied into on Google’s services. It includes a web-based application that allows you to rate local establishments and is also integrated into Google Maps 4.7 for Android 1.6 and above. An iPhone version is expected to debut soon. Google is bringing these services and handset features like NFC together to form a comprehensive social recommendation platform. NFC is integral to this development of this platform as it makes it drop-dead easy to retrieve information and, in the future, to potentially make payments directly from your handset.