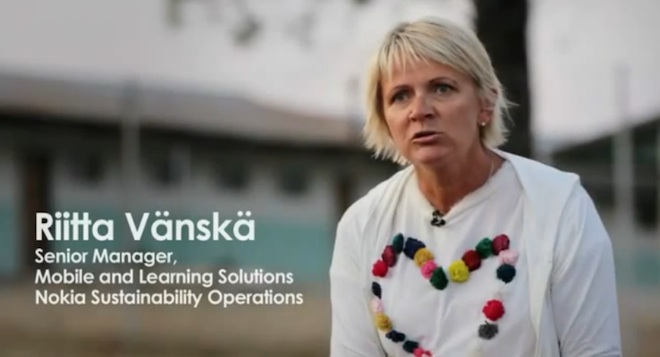 While students in North American schools are using their mobile phones to ignore what the teacher standing at the front of the class is saying, that and trying to successfully score enough alcohol for the party on Saturday, something different is happening in South Africa. The government asked Nokia in 2008 if they could help integrate mobile phones into the classroom, and the first subject to get trialled was mathematics. If you’ve got 10 minutes to spare then check out the video below, but if not then here are the main points: in South Africa there’s an instant messaging client called “MXit”; think of it as their AIM or MSN. Nokia integrated math curriculum with the messaging provider and saw scores rise by as much as 14%. Not only that, but the children were using MXit when they were away from the classroom. One of the kids who was interviewed said that unlike a textbook, his phone can tell him whether or not he got the right answer.

Riitta Vanska, Project Manager for the initiative and Senior Manager of Mobile and Learning Solutions in Sustainability Operations at Nokia says: “Most learners do not have access to computers however many of them do have access to a mobile phone. The initiative gives Grade 10 learners the opportunity to study mathematics anywhere and anytime which in turn gives them the chance to empower themselves.”

It’s only going to be a matter of time until we see textbook writers start publishing applications for the iPhone and Android platforms. How will teachers feel about integrating the digital material into their coursework? There’s a classical way to train young minds, but at some point you’ve got to admit that unless you work on the children’s terms then you’re not going to get anywhere.

As part of its Ping social networking service, Apple has reportedly started using iTun.es domain for link shortening. According to...